SHARE
Contents
Surfshark VPN Review – IntroWhat does a VPN do for me?How to use it on my phone?How Much does it Cost?Can't read the articles right now? Save it for later! Subscribe to Android News & All the Bytes by entering your email — so you can read it during your downtime!

My Surfshark VPN review is just that a shark in the battle to retain customers privacy. You can’t be too careful when out and about. Using “FREE” WiFi does carry a risk. With the hustle and bustle I do, I have to ensure that my information isn’t compromised. This is one of the best VPN I’ve used.

I’m using Surfshark in my travels and even when I’m home. How do I use it? By making sure that it’s on while on mobile data and open WiFi points.

What does a VPN do for me?

What does this give me in return? Connecting to a WiFi point using a VPN ensures the data is kept secure and encrypted. Through a VPN you can browse the web in complete anonymity. You can also access applications with a certain level of anonymity. You can access restricted content from Netflix or HBO because you can select a VPN that is located in the country of the content you are interested in. Better overall internet access. Ensures your overall security while using anything internet base.

Among some of the items listed above that you can find, I was able to get more in-depth.

By using the service I was able to conclude that it does not leak information about who you are. A DNS leak test ensured that. Since the service operates out of the British Virgin Island they are not subject to the “14 Prying Eyes” which are 14 countries that collect data and share it among each other about the people under their jurisdiction.

Surfshark can be used on nearly every device or platform. You can use it on Windows, Mac, Linux, iOS, and Android. It also has an extension for Chrome and Firefox.

The camouflage mode that Surfshark offers indicate that even your own internet service provider won’t know you’re using a VPN. If you’re also in the habit of using TOR, you can combine the two!

I could include a lot more technical details that would just go over most people’s heads. So I’ll stick with the above. Surfshark is a definitive YES in my book when it comes to privacy online.

How to use it on my phone?

How to get SurShark running in a few simple steps:

How Much does it Cost?

I would recommend getting the $1.99/month if you subscribe to their 2-year plan. Which is less than $50 USD for 2 years. It’s cheaper than another big name VPN out there.

I highly recommend their online chat if you need any type of support, it’s pretty fast. Still, one of the best VPN you can use. 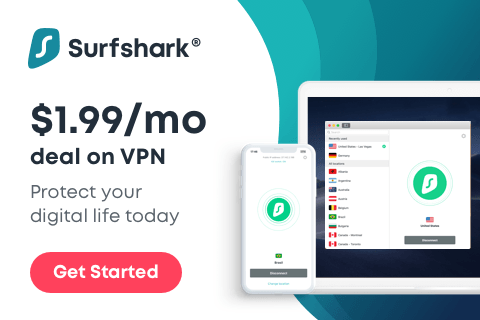 Tip Sheet you never knew you needed for that Mobile Makeover
AdBlock Detected
Our site is supported by ads, affiliate links, and sponsored content. This helps us make money to continue what we do. Please whitelist to support our site.
Okay, I'll Whitelist
Welcome Back!