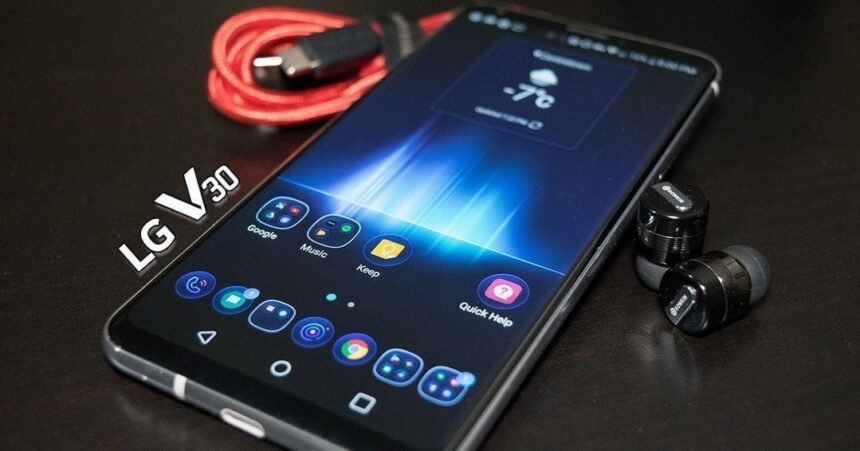 The LG V30 came out at the end of 2017 and already they’re numerous reviews about the good and the bad. While it’s true that all smartphones have pro’s and con’s, in the end, it will depend on each consumer.

The LG V30 much like many of the other brands out there feature a similar list of hardware that doesn’t differentiate from the mass. Canada LG V30 Flagship review

The V30’s elegant Design
The device has a Samsung/iPhone feel it in its design look and feel.
I would have preferred a more “unique” design that would distinctively showcase the V30 compared to what’s on the market. There’s speculation that the LG G7 will feature a new design model.

Let’s have a look at the body of the device with it’s all around aluminium framing, plastic back and front curved edge glass which supports Gorilla Glass 5. I’m having trouble believing that it’s Gorilla Glass 5 as it’s scratching so easily it’s not even funny. Canada LG V30 Flagship review

It’s Almost a Staple in design
The LG V30 also provides you with a fingerprint sensor at the back of the device which reacts quite fast. Which will make most people happy, it’s not nearly as instant as I’ve seen, but I can’t complain.

The V30 Photographer in you
LG wanted to make sure that this device would line-up with the rest of the competition. The main camera features a Dual-Shot with Dual-Tone setup with a 16MP Normal angle with f/1.6, OIS 2.0 and the secondary 13MP Wide Angle with f/1.9.

While the specs are great to look at, I think the software for the camera app was poorly executed. I’ve had mixed results with pictures. Some looked good, others washed out, other blurry, pixelated etc. Of the shots that are good, WOW! Better make sure to adjust the settings beforehand for what you need.

The front-facing camera has left me a bit perplexed, LG made a conspicuous choice to go with a 5MP while the competition is opting for more. I would have wanted to see a higher MP rate with a f/1.6, this would have made much more sense for selfies.

The overall low light shots aren’t that great if anything they look faded and quite dark. With an f of 1.6, you’d think you’d have some great shots in lower light condition but when a Nexus 6P still does better, I wonder.

The brilliance of the OLED
LG went with a QHD+ OLED panel for their display which offers some stunning visual quality. The resolution is 2880×1440 with an aspect ratio of 18:9. To be anything more than 1080P on a smartphone device is overkill, the majority of household still have 1080P Television, why would we need something more HI-DEF on a smartphone?

Mind you, the screen is definitely nice to look at while playing games. Where LG could have done something worthwhile, increase the refresh rate from it’s current level to 120MHz, something that we’ve recently seen on the Razer.

The music aficionado
Where the LG V30 shine is the integrated DAC that LG made sure to have with the headphone jack. Yes, there’s a headphone on this device. This gives you a Supports Max 32bit / 384KHz audio files through wired headphones.

Streaming music from services like TIDAL which offers lossless music playback might be something you’ll want to try. If not, you can always play the lossless music you’ve got in your collection. Wait, is that still a thing? I guess, for the nostalgic, this might still be a thing.

Is this really a Beast?
As stated earlier a lot of the internal hardware of the V30 is very similar to what’s on the market. As if manufacturers aren’t trying hard enough to demonstrate they can do better.

While using the device I’ve been playing games, switching to different apps, answer notifications, take phone calls or send messages and the likes, the device didn’t skip a beat. I’m quite impressed with the performance of it.

The hefty Snapdragon 835 with 4GB of RAM might be responsible for a lot of that. This allows for use of the device while keeping all the frequently used app open so that you can access them quickly without the need to reload it.

I’ve yammered about Samsung’s use of TouchWiz and the UI, but LG is in the same boat, why is it so HARD to have a standard Android UI on all devices? Let me make the choices I WANT and not forced upon me a menu grouping that baffles me at times? I mean, at least give me the choice to customise the settings menu the way I want to see it.

Surprisingly, the UI and skin that’s on the device by default aren’t impeding performance as much as how Samsung does it.

This is, interestingly enough, the first LG Device I’ve used. I’ve tried many brands, officially working with one that is.

It doesn’t have Oreo on it yet, but there are rumours that the update is starting to roll out for some people in Asia, hopefully, this will trickle down to Canada fast enough. Coming from someone that’s been on Android Oreo, I can see some changes by going back to Nougat.

Where’s my cable I need to plug it in
The battery life of the LG V30 isn’t where I’d expect it. I get an average of 12 hours of usage which brings it down from 100% to 15% with 5 hours 45 minutes of actual screen time. I did notice that if I’m not using the device I could still be at 15% EVEN after 8 hours of standby. I’ll give credit to LG, the standby of the device is fantastic.

With it’s 3300mAh battery, I did expect a bit more actual phone usage that would stretch itself to at least 16 hours. I do get to go through the day without a charge which is mainly what most people are looking for, so with that LG does get a passing grade.

You can use QC 3.0 with the LG V30 and this should be more than enough to top you up in no time at all.

Should you buy the LG V30? Is it for you?
The smartphone performs very nicely in all areas when it comes to playing games, apps, internet, videos etc. The cameras are, however, a hit and miss in most cases. The display is stunning and works well. The battery life is on par with most and gets’s you through the day. The sound you can get out of this device is pretty stunning.

I feel that LG missed the mark earlier last year with their announcement and release. The announcement came earlier than most other manufacturers and their release was after some of the top names in the industry. This is where LG missed their chance to make an impact on the market. Canada LG V30 Flagship review

This is an excellent phone for almost anyone, minus the few quirks it has. If your focus is the camera, this isn’t the device for you, if your focus is sound, gaming, productivity and the likes, BOOM, get it.

Action Launcher improves AdaptiveZoom, more enhancements in latest update
AdBlock Detected
Our site is supported by ads, affiliate links, and sponsored content. This helps us make money to continue what we do. Please whitelist to support our site.
Okay, I'll Whitelist
Welcome Back!