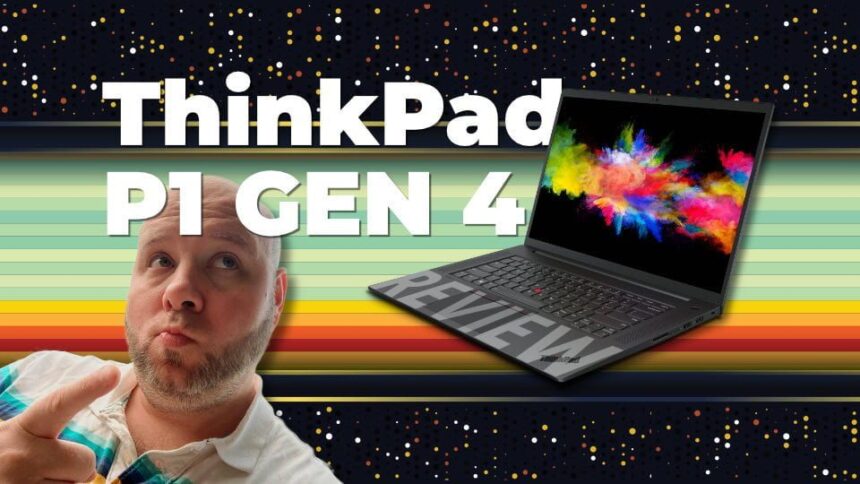 The Lenovo ThinkPad P1 Gen 4 is a 16-inch mobile workstation that is as portable as it’s powerful. With a 6-core CPU and 12-threads, 64GB of RAM, 2TB SSDs, and a 4GB Nvidia RTX A2000 GPU, it can tackle the most demanding tasks while on the move.

This laptop is everything I need to be productive. Its high-resolution 16:10 screen and comfortable keyboard and touchpad make it easy to get things done. In addition to its professional look and quality construction, it is also very durable. There are cheaper laptops, but this one is well worth the price. I highly recommend it. Take the time to follow me through my review, and you’ll understand why. In terms of performance, however, expect the ThinkPad P1 Gen 4 to not disappoint: it comes with a 6-core Intel Xeon W-11855M CPU with 12 threads (3.2GHz to 4.9GHz), which is a considerable improvement over the Comet Lake chips in the last year’s ThinkPad P1 Gen 3.

Equipped with 64GB DDR4-3200 of memory, 2TB of SSD storage, battery life nearing the 10-hour mark with a balanced approach, 4GB Nvidia RTX A2000 GPU, it’s no wonder this beast is killing it. Lenovo’s ThinkPad P1 Gen 4 is a thin and powerful laptop. For a system with so many powerful components, this workstation is impressively slim at 0.70 inches (17.7mm). Besides providing an excellent tactile response, the keyboard has a white backlight and a simple UltraNav system. An integrated number pad would not have fit neatly.

Designed with a spacious buttonless touchpad, the ThinkPad P1 Gen 4 proves responsive to physical clicks, providing slight feedback to let you know you’ve pressed it. The front-facing speakers deliver clear audio. The power button on the right side works as the fingerprint reader.

This screen is a touch screen of 16″ WQUXGA (3840 x 2400), which also has a higher rated brightness of 600 nits and 100% Adobe RGB colour. All screen options include a 1080p webcam with a sliding privacy shutter, though some models have infrared technology for facial recognition.

The ThinkPad P1 G4 has several ports for peripherals, including an SD card reader, two USB-A 3.2 Gen 1 ports, and a Kensington NanoSaver lock slot. The SD card reader features a full-size format for those who like to take photos or videos. Optional 4G/5G wireless mobile broadband may also be available through the SIM card slot. The Intel Wi-Fi 6E AX210 + Bluetooth 5.2 vPro should satisfy those who need to connect wirelessly to the Internet. Users can view the ThinkPad P1 G4 cooling fans through the bottom grate on the system. The exhaust goes out the rear edge of the machine, so it’s noticeable while working on more CPU-intensive tasks, but it is typical of mobile workstations. It does accumulate dust pretty easily. Despite pairing a Xeon CPU and ECC memory pair, our review model costs the same as the ThinkPad P1 G4 with non-ECC memory and comparable specifications. However, if you need ECC memory, the 6-core Intel Xeon W-11855M CPU with 12 threads (3.2GHz to 4.9GHz) coupled with the 64GB of ECC RAM and the A2000 4GB GPU from NVIDIA make this thing quite powerful.

The included Nvidia RTX A2000 is the most affordable in terms of ray-tracing GPUs. Depending on the workload, its limited video memory of 4GB can quickly run out, so you might need to upgrade to a better GPU model with more memory.

The next step is to complete some real-world benchmarks with games and tools. I will be using Far Cry 6, Assassin’s Creed Valhalla, 3DMark, PCMark, Cinebench, CrystalDiskMark, SPECworkstation 3, and SPECviewperf 2021 to provide a detailed portrait of how well it performs under each condition. In the 3DMark benchmark application, we left all the settings to default and used the recommended test. The test is TimeSpy for gaming machines. Testing resolution and settings for 1080P and 1440P. We received results and averages of 30+ FPS at 1440P and 50+ FPS at 1080P. We used the benchmark process in an actual game from Ubisoft. Far Cry 6 offers its test to see how well the game settings will perform from low to ultra. Since the ThinkPad P1 Gen 4 is not a gaming laptop, I tested the settings on HIGH and MEDIUM. The results are miffed. The graphic set to high resulted in an average of 12 FPS, while the medium settings yielded an average of 50 FPS.

The gameplay didn’t differ significantly between medium and high, allowing a fun experience even with settings set to medium. The multitude of tests establishes an average score of 5,844 points (higher is better). The system indicates that we are 70% more than most laptop systems, whether office or gaming. Testing real-world gaming with Assassin’s Creed Valhalla and having the settings set at medium, we get an average of 57 FPS. I have the resolution at native, which is 2560 x 1600. If you don’t put the graphics to the highest, the gameplay is still fantastic. Gamers will notice hardly any difference except for some smoothing.

Taking a step further, I’ve upped the game to high. Running through the same scenario as above, we see an average of 34 FPS, which is still great for gaming.

The real meaning of good Cinebench R23 scores depends on workloads. For decent gaming, make sure your single-core score is over 1000. For 3D rendering, the higher the multi-core score, the faster you’ll render scenes, but anything above 20k multi-core points will allow you to render complex scenes, think Pixar.

In the single-core CPU tests, we are getting 1,503 points. When it comes to the multi-core result, we are reaching 8,277 points; This shows that we are in the same score bracket as most major intense office work laptops.

The results of the SSD NVME test are interesting. The Samsung SSD PM9A1 NVMe 2TB is the drive in question. The results of comparable and slightly higher than the Samsung SSD 980 Pro 1TB or the Corsair Force MP600 1TB. Sequential SSD test shows a read capacity topping at 3,457.45MB/s, with its write capacity reaching 2,850.87MB/s.

That outlines the peak performance when copying large files. What about when there’s a bunch of smaller files? The random test of multiple smaller files shows a read capacity of 72MB/s, while the write capacity reaches 143MB/s.

***The below results are for the professionals that need to do 3D modelling, advanced computation etc.

These are the results from the ThinkPad P1 Gen 4 The Lenovo ThinkPad P1 G4 blazes a trail of virtue in the workstation market, being both powerful and portable. The ThinkPad P1 Gen 4 is a slim, lightweight machine with a powerful, professional appearance. Its cutting-edge technology and innovative software make the P1 Gen 4 a worthy choice for business users looking to optimize performance and productivity.

It improves upon its predecessor by offering a more productive 16:10 screen aspect ratio, a dedicated working class GPU and a processor that delivers the crunch needed to get the job done.

Our review model performed well, besting similarly-equipped competitors. This mobile workstation may be a bit pricey, but it is still quite decent compared to other models in its class. Overall, the ThinkPad P1 G4 gets our recommendation. Mobile workstations are expensive, and the ThinkPad P1 G4 is no exception; This is in line with the prices of other similar machines on the market.

Why IT Is So Important To Your Business?
AdBlock Detected
Our site is supported by ads, affiliate links, and sponsored content. This helps us make money to continue what we do. Please whitelist to support our site.
Okay, I'll Whitelist
Welcome Back!