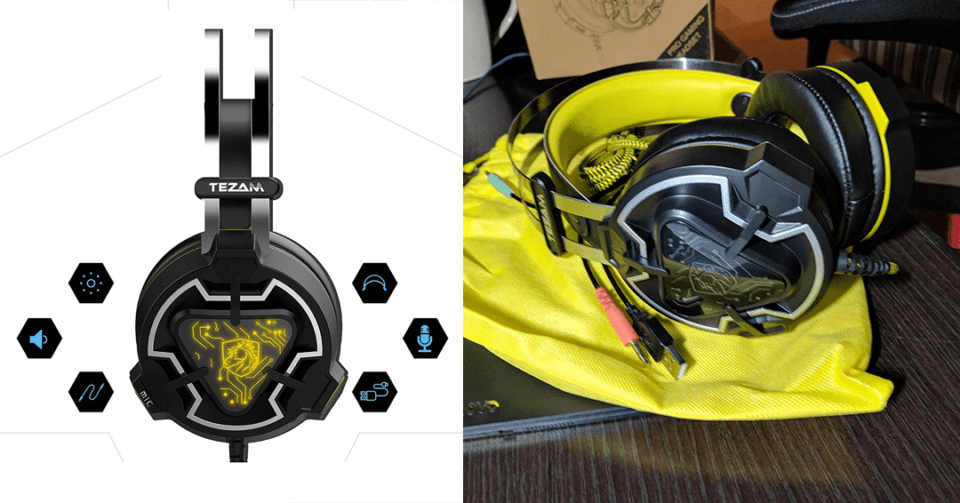 I like to think I’m pretty objective when it comes to my scores for listening to music. While I’ve had the pleasure of using any number of headphones I tend to mostly use them for listening to some kickass EDM. I made an exception with Tezam’s gaming headset. I took for a spin for playing PC games. It’s also good to note that you can also use it on Xbox, PS and your smartphone!

The gaming headset worked great when in was in the trenches of Battlefield communicating with my team and listening in on the conversation that ensued among team members, there was no doubt this was working just as it should. The hidden microphone on the side is a hidden little gem however it does pick up a lot of the noise around you.

Volume control enabled on the headset itself made this a breeze to control while in-game. For $54.99 on Amazon Canada, I thought this was ok. Here’s the problem that I have, while this is a gaming headset, a lot of people, especially the ones that will play video games will no doubt also use the headset to listen to music and this is where I am an issue.

The first thing you’ll be able to hear is the loud bass that get’s muffled the moment it gets too low, which isn’t enjoyable. While the mids are at the levels they should this also left the highs to be desired with crisp distortion if it got out of range. This brings me back to saying that this wasn’t made to consider music but mostly when playing games.

You’ll be provided with a USB connector which activates the lights on the headsets, the 3.5mm audio jack as well as the 3.5mm jack for the microphone connection. I was a bit intrigued to see that everything was built into the USB connector, something to consider as well.

I’m going to give this a big 3.5 stars out of 5 because for the simple fact that if you intend to use this beyond playing video games you are wasting your time.

Review: An Ergo 34-inch (34WN780) UltraWide Monitor by LG for the Modern Office

7 Ideas To Improve Your Business Operations