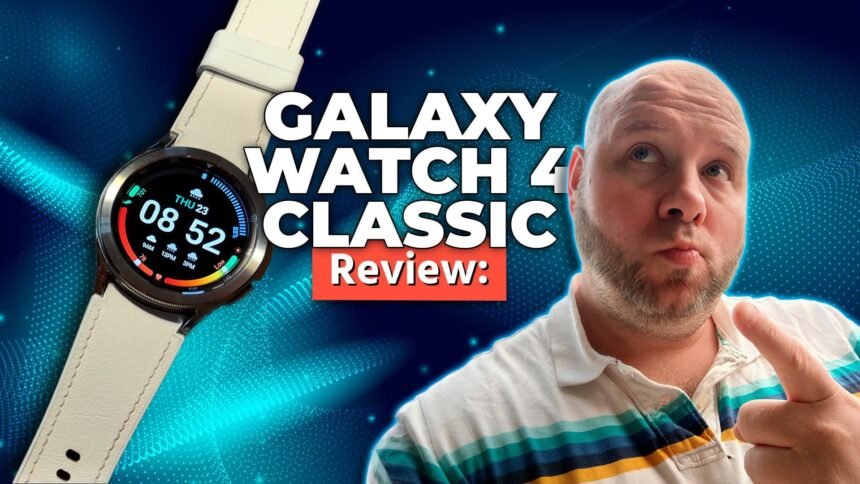 SHARE
Contents
The Galaxy Watch4 classic is the next step in the evolution of Samsung’s smartwatch. It’s an all-rounder with more than enough to make it one of the best on the market.IntroThe DesignWear OS & FeaturesBattery LifePrice & Final NoteCan't read the articles right now? Save it for later! Subscribe to Android News & All the Bytes by entering your email — so you can read it during your downtime!

The Galaxy Watch4 classic is the next step in the evolution of Samsung’s smartwatch. It’s an all-rounder with more than enough to make it one of the best on the market.

You may have lusted for an Apple Watch-like device if your phone is an Android. We’re obviously not asking for much, but we’d like a watch that has a robust app store, granular health-tracking features, and an intuitive interactive interface. Do not despair; there’s still hope. Google’s Wear OS smartwatch platform finally awoke after more than seven years and is racing forward; to become a viable competitor.

I called last year’s Galaxy Watch3 the premium Android smartwatch, and the Galaxy Watch4 Classic stands as a successor to it. Though the company has made its new smartwatch different from its predecessors in many ways, it still shares many characteristics with the old one. Fitbit (a subsidiary of Google) and Samsung worked together on Wear OS 3 to release its latest version. Galaxy Watch4 and Galaxy Watch4 Classic are the first watches to use them. While Samsung has been developing its smartwatch platform, Tizen, for years and has produced numerous stylish smartwatches, it decided to change course and join forces with Google instead.

I am reminded of a lot of previous Samsung smartwatches when it comes to the design of the Galaxy Watch4 Classic. In addition to the circular display and two buttons on the side, the rotating bezel is one of the most recognizable features of this device. The smartwatch model sent to me is the 42mm Watch 4 Classic, which offers a slightly smaller display than the 41mm Watch3.

Only Black and Silver models are available for the Watch4 Classic. To get more colour options, you’d need to get the Watch4 (not the Classic version), but then you’d lose the rotating bezel. In terms of the display on the Galaxy Watch4 Classic, it’s decent. I don’t look at pictures like I would a smartphone or anything like that.

Under the hood, the Galaxy Watch 4 Classic boasts a 5nm processor and 16GB of storage, doubling the amount provided by last year’s device. In comparison with prior Samsung smartwatches, the Samsung Galaxy Watch4 Classic offers significantly more features developed with Wear OS. A selection of apps is accessible from the watch’s home screen by swiping up. One thing that stands out on this screen is the presence of the Google Play Store. In contrast to Samsung’s Galaxy Store, you have access to an extensive range of apps in the Play Store.

The fact that Google Maps, Google Fit, Google Pay, Google Keep, Telegram, YouTube Music, and tons of other apps were available on the watch was neat. I don’t typically use a lot of apps on my smartwatch. It was pretty exciting to have the watch be able to send messages, voice messages, and pay in stores.

There’s no blood pressure or ECG measurement on the Canadian Galaxy Watch4 Classic. However, the company claims that it wasn’t its fault; The company is still waiting for Health Canada’s approval to activate the features.

With nearly any Android phone, you can get everything else. Monitoring from standard heart rate, motion reminders, snore detection, and blood oxygen monitoring (SpO2) come by default. There’s a new metric called bioelectrical impedance analysis (BIA). Using an electrical signal, it measures body fat the same way smart scales do. In our test, we weren’t able to determine its accuracy.

While testing on another device, the results of my walks with the Watch4 seemed fairly accurate. Conveniently, Samsung pauses the tracking at traffic lights. Additionally, it shows you your heart rate, and a GPS map shows exactly where you are.

Though I wish the battery life was better, it’s far from a deal-breaker. Samsung claims the Galaxy Watch4 can last up to 40 hours with normal use. Rest assured, you can use it all day long. You can easily pick it up at 6 am, strap it on, use it for a full day and get back home after your workday, and be at 30%.

It’s the next step in the evolution of Samsung’s smartwatch. It’s an all-rounder with more than enough to make it one of the best on the market. Rounding itself to be CA$499.99 or US$349.99 from Samsung, alternatively, if you want to save yourself $40, you can get it from Best Buy CA for $459.99.

This time around, the Watch4 Classic is not compatible with Apple products. Also, I like as it comes with Wear OS, as well as access to the Play Store directly on the watch. That’s a big improvement over only having the Galaxy Store.

Unfortunately, this year’s device still doesn’t have an ECG or blood pressure monitor, which are two features that users would enjoy. Samsung’s Watch4 Classic offers plenty of customization and features. It looks great and operates smoothly. 6 Smart Home Technologies You Should Have in Your New Home
AdBlock Detected
Our site is supported by ads, affiliate links, and sponsored content. This helps us make money to continue what we do. Please whitelist to support our site.
Okay, I'll Whitelist
Welcome Back!