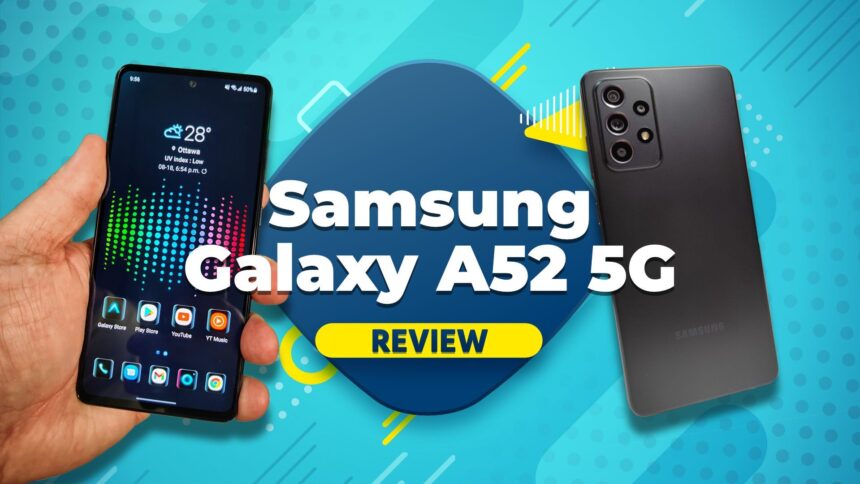 SHARE
Contents
Powerful midrange you might just needSPECIFICATION AT A GLANCEAppearance/DesignPrice comparisonThe phone screenVroom Vroom – PerformanceThe power of Samsung’s CameraBattery LifeVerdict? Should you buy the Samsung Galaxy A52 5G?Can't read the articles right now? Save it for later! Subscribe to Android News & All the Bytes by entering your email — so you can read it during your downtime!

The Samsung Galaxy A52 5G won’t be going to blow you away with top-end specs, and it does offer a remarkably affordable price. Featuring a solid mid-range phone that competes well with Google Pixel 4a devices, it is a device of interest for anyone. You might enjoy the Galaxy A52 5G if you are seeking a phone at an affordable price point.

Samsung’s Galaxy A52 5G is currently available for purchase in the US, UK, Australia, and Canada after being revealed in March 2021. It went on sale in April of the same year. The device is on sale for $529.99 in Canada and $374.99 in the United States. In contrast to flagships, the Galaxy A52 5G is built solidly without all the frills and bells you’d expect from a premium smartphone. As a result, you may feel the build of the handset is a bit cheap because of its plastic rear and aluminum frame.

Four colours are available, and two of them are particularly striking and bright. If black is not for you, you have the choice of white, purple, or blue. I’m partial to blue, but I have the Black version for this review. IP67 certification also ensures dust and water resistance.

This smartphone still has its 3.5mm headphone jack located on the device’s bottom edge. You’ll find it right next to the USB-C port, and you’ll find a volume rocker next to the power button. Additionally, there’s a punch-hole camera embedded within the screen, so there is no massive bezel at the top. Turning the display to the max setting, the 800 nits of brightness looked great; This is a Super AMOLED display with a Full HD+ resolution. Watching videos on this display is a delightful experience for anyone interested in viewing content. Then again, this also applies to people who like to play mobile video games.

There’s a punch-hole camera at the top, and the bezel is somewhat thick around the display. Although it does look great when you’re watching a video or browsing through social media feeds.

A 120Hz display is one of the main upgrades from previous Galaxy A smartphones, which is typically only available on flagship models. By doing this, the screen of your smartphone refreshes faster than the screen of most other smartphones. As you browse social media or play mobile games, you enjoy a smoother experience.

The difference is particularly noticeable while playing mobile games and when scrolling through social media feeds. There is also the option to turn this feature off in the settings, but I would encourage you to try it out for yourself first. The chances are that you won’t want to stick with something that feels sluggish.

Additionally, there is an in-screen fingerprint scanner, which I found to be a hit or miss. Although sometimes it takes a little longer than I would like for the phone to read my fingers, it is still usable. If you don’t like having to enter your PIN, you can use this alternative. Those of you looking for fast 5G connectivity should consider the Galaxy A series. Although it allows for next-generation internet connectivity, most people will see it simply as a future-proofing strategy until the technology becomes more prevalent in the future. The current 5G speeds in Canada are comparable to LTE.

Snapdragon 750G is an octa-core processor powering everything on this device. It won’t give you the highest performance, but it will handle most tasks, and you shouldn’t be disappointed. As long as a power user like myself can use it daily, everyone else should be able to do the same. My assumptions are, of course, based on my own experiences.

If you need a sneak peek into the world of mobile gaming on the Samsung Galaxy A52 5G, and benchmarks are your thing. Geekbench 5 revealed that the phone scored 1,990 on average on multi-core. With 3DMark Wild Life, designed for high-end devices, I scored 1,113 with 6.7FPS. Almost all games developed are done on mainstream smartphones and tablets, and Slingshot is the benchmark for those devices. It delivered much better with a score of 3,941 with an average of 34FPS.

In this Samsung phone, you’ll find 6GB of RAM and 128GB of storage. That’s the only version available in Canada. Should you need more space, there is a MicroSD slot that supports up to 1TB. Samsung recently dropped microSD support from its flagship phones.

Powered by Android 11 and Samsung’s own One UI 3.1, the Galaxy A52 5G adopts Samsung’s design language. As a result, you’ll get all the latest from Android, and Samsung’s expected to keep it up-to-date for several years after launch. In addition to regular security patches, Samsung has promised three years of upgrades.

The power of Samsung’s Camera

I found in my testing that the results of the Samsung Galaxy A52 5G camera are excellent. It can even compete with a smartphone camera as good as the Google Pixel 4A at this price point.

It features a 64MP primary sensor and an f/1.8 aperture; This camera offers optical image stabilization. As well as a 12MP ultra-wide lens, the phone has a 5MP depth scanner and a 5MP macro lens.

With the main rear camera, we found that images delivered by the camera were vivid and detailed, and lighting was usually not an issue. Common for Samsung phone cameras to have quite saturated images. Due to the lack of a telephoto lens, zoom quality very quickly degrades. However, most people won’t be affected by this. Although the quality of the ultra-wide lens and the macro camera on this smartphone is acceptable enough, it fails to measure up to the primary camera on this device. This top hole on the screen hosts a 32MP selfie camera. The selfie shots were great, and video calls were a breeze. I wouldn’t expect you to have any problems with the front camera quality.

At this stage in the smartphone game, even midranges are doing quite well with picture quality.

With a battery capacity of 4,500mAh, Samsung says the Galaxy A52 5G can last up to two full days. I found that it lasted closer to a full day of daily use, and by daily, I mean a full workday and evening use. If you don’t use your phone a lot, it may last you a couple of days.

I found that it was able to last a full day in most of my tests, with between 22% and 10% left after a recharge when I came to charge it at night. You can charge your phone up to half full using fast charging here in just 30 minutes if you use the phone a lot.

You’ll have to use a wired charger to replenish your battery when the Galaxy A52 5G runs out of power. There’s no wireless charging on this bad boy. Verdict? Should you buy the Samsung Galaxy A52 5G?

Using this smartphone, I have found the 6.5-inch display to be very impressive when watching a video or playing games. In addition to a good resolution, it has 120Hz, so it feels like an alternative to flagship models.

The Galaxy A52 5G is an excellent choice if you’re looking to start using super-fast internet and require a cheaper smartphone with 5G capabilities. Just remember that 5G still hasn’t reached every corner of the world, so it’s not yet at its full potential.

You’ll find a phone capable of lasting a day if you choose the Galaxy A52 5G. The battery life isn’t as good as some other phones around this price with medium or high usage, but it’s better than some others.

There are more powerful options out there in this price bracket. However, you won’t get the absolute best performance for your money with the Galaxy A52 5G.

You may find that the Galaxy A52 5G is not the cheapest phone on the market, so you might want to consider alternative options in the Samsung Galaxy A series such as the Galaxy A42 or Motorola or Google that might suit some people’s budgets better.

Review: ThinkPad X13 Yoga G2 A Convertible for the Business
Next Article

What is my IP? Most searched term on Google 2021? Crazy Interesting!
AdBlock Detected
Our site is supported by ads, affiliate links, and sponsored content. This helps us make money to continue what we do. Please whitelist to support our site.
Okay, I'll Whitelist
Welcome Back!