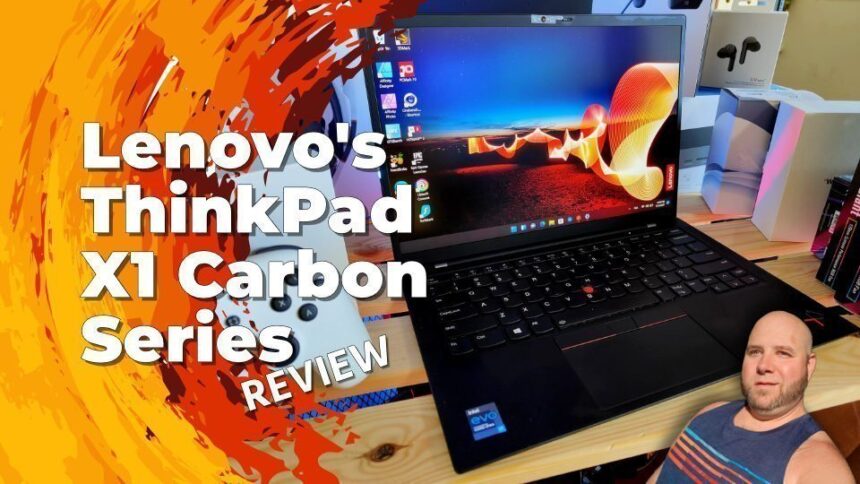 Whether you’re editing documents, combing through spreadsheets, writing code or browsing the web, you’re looking for a laptop that’ll help you get more done in less time. Thanks to an excellent keyboard, a wide range of ports, and long battery life, Lenovo’s ThinkPad X1 Carbon series of laptops have led the productivity market for several years.

Starting for as low as US$1,284.80 (3,369 as reviewed), the Canadian version is available for CAD$2,149.92. The ninth-generation X1 Carbon upgrades to a 16:10 screen that allows you to fit more documents on the screen simultaneously. Whether you’re buying an ultrabook for business or personal use, it boasts excellent audio and over 16 hours of battery life on a well-balanced battery setting.

We’ve come to expect Lenovo’s ThinkPad aesthetic when it comes to the ThinkPad X1 Carbon Gen 9. Magnesium and carbon fiber combine to form the lightweight chassis, with a soft-touch palm rest. To accommodate a 16:10 aspect ratio screen instead of the 16:9 panels Carbons have previously used, the stretched chassis is narrowed (12.38 x 8.72 inches compared to 12.7 x 8.5 inches). By doing so, you can read web pages or edit documents on a bigger vertical screen. ThinkPad X1 Carbon Gen 9 measures 12.38 x 8.72 x 0.59 inches, weighs 2.5 pounds, and is vastly light for a laptop, let alone one with a 14-inch screen. The ThinkPad X1 Carbon Gen 9 has all the ports people need, unlike many ultrabooks that only offer USB Type-C / Thunderbolt ports. It features two Thunderbolt 4 / USB-C ports, a USB Type-A 3.2 (5 Gbps) port, as well as a full-size HDMI port on the left. There is a second USB Type-A port on the right side, as well as a Kensington lock.

My review configuration of the ThinkPad X1 Carbon had a Core i7-1185G7 CPU, 16GB of RAM, and 512GB SSD that handled all my testing while having more than 45 tabs open and a live Twitch stream and being on cam at the same time. I took this further I also decided it was a good idea to play video games, but more on that later.

To test or simulate real-world productivity and content-creation processes, I use PCMark10. The software allows me to assess overall system performance for office-oriented tasks such as word processing, spreadsheets, web browsing, and videoconferencing. An average score of 4,000 to 5,000 indicates excellent productivity for everyday tasks. In short, the graphic shows you the overall score and subset scores. The laptop did very well in all of them. It will deliver the performance you need when it comes to working in an office.

Coupled with an office-type test, it wouldn’t be a complete test without checking the performance; This is where CrystalDiskMark comes in. The application is used in the industry to test the performance of reading/writing.

In the graphic below, you can see the details of the test. Here, I’m using the profile real-world performance. I’m running the test 3 times with 32GB of data. I’m especially interested in seeing the performance. The first result will give me a good idea of the drive’s performance in copying large files. Continuing on my trend of sharing benchmarks, Geekbench 5, the X1 Carbon returned a single-core score of 1,476 and a multi-core mark of 4,452; This looks very similar to other systems such as the Microsoft Surface Pro 8, HP’s EliteBook x360 G8 or Dell XPS 13.

Using the profile for integrated graphics Night Raid in 3DMark (which means there are no dedicated video cards like an AMD or NVIDIA), allowing me to test the capacity of the onboarding video processing. The test showed that the ThinkPad X1 Carbon Gen 9 reaches an average of 30 FPS on 1080P with HIGH settings.

While you can play video games, this isn’t a gaming laptop. The settings for each game will vary to get a decent experience. To assess how the ThinkPad X1 Carbon (Gen 9) performed over time, I ran Cinebench R23 dozen times in a row. The laptop averaged 4,700 points with a high score of 4,876 on our third run. Cinebench is an evaluation tool that evaluates the hardware capabilities of your computer in real-world scenarios. It provides your CPU with a score and ranking among other systems out there. Computers are often put to the test when editing videos. Transcoding multimedia files to different formats and resolutions are possible with HandBrake, an open-source video transcoder. The focus of this test is CPU performance. This benchmark scales well with more cores and threads, and it works well in systems capable of handling heavy, sustained loads over an extended period. This benchmark is time-sensitive, so lower times are better.

In order to transcode Blender Tears of Steel 4K video, which is a 12-minute video, I used the preset FAST 1080P 30 FPS. It took me 14 minutes and 54 seconds to transcode. With GFXBench, you can stress-test both low-level routines like texturing as well as high-level, game-like image rendering across multiple platforms. Higher numbers are preferred.

I know that benchmarks are just that. I’ve also taken to installing The Division 2 and ran the actual game’s benchmark process. Considering that I don’t have a video graphic card and this is an integrated graphics processor, the game detected me at LOW settings. While still very playable and enjoyable, I landed with 44 FPS in this real-world benchmark. The black bars on the top and bottom of videos were larger on this laptop display because of the 16:10 aspect ratio. Although the matte screen had strong viewing angles, it was bright, and colours barely faded even when viewed at 90 degrees to the left or right. There are four screen options for the ThinkPad X1 Carbon (Gen 9) – all 16:10 aspect ratios, giving you significantly more vertical real estate than 16:9 panels. The unit I reviewed came with a 1920 x 1200 touchscreen.

Despite its relatively small size, the ThinkPad X1 Carbon boasts 57 Whr battery life, among the longest I’ve seen on a laptop in recent memory. In my battery test, which involves web surfing, video streaming, and constant web browsing at 50% brightness over Wi-Fi, Lenovo’s ultrabook lasted 5 hours and 06 minutes.

Assuming that you use the computer continuously in this manner, I completed an average of various times, with the battery on a “balanced” profile. I do expect office staff and home users will have a higher battery time threshold.

Video conferencing is more than adequate with the 720p webcam. In my opinion, get yourself a good 1080P dedicated webcam. My face appeared fairly detailed when I took a photo of myself at night with some overhead lighting. The colours around me are somewhat muted, but most of the time, accurate.

It’s hard to pick a single thing that I dislike about the Lenovo ThinkPad X1 Carbon Gen 9, from its responsive keyboard to its music playback ability to its productivity-centric screen. This laptop weighs just 2.5 pounds and is just 0.6 inches thick, so it’s very light but still offers you the performance and long-lasting battery life.

It’s hard to beat the ThinkPad X1 Carbon Gen 9 for an ultrabook that helps you get work done and stay entertained without weighing you down.

On the downside of the spectrum, the webcam on the laptop suffers. It shouldn’t come as a surprise to anyone who uses laptops, though. What You Need for Strong Cybersecurity in Business
Next Article

(Review) Is the Secretlab Titan XL Cloud 9 worth the money?
AdBlock Detected
Our site is supported by ads, affiliate links, and sponsored content. This helps us make money to continue what we do. Please whitelist to support our site.
Okay, I'll Whitelist
Welcome Back!