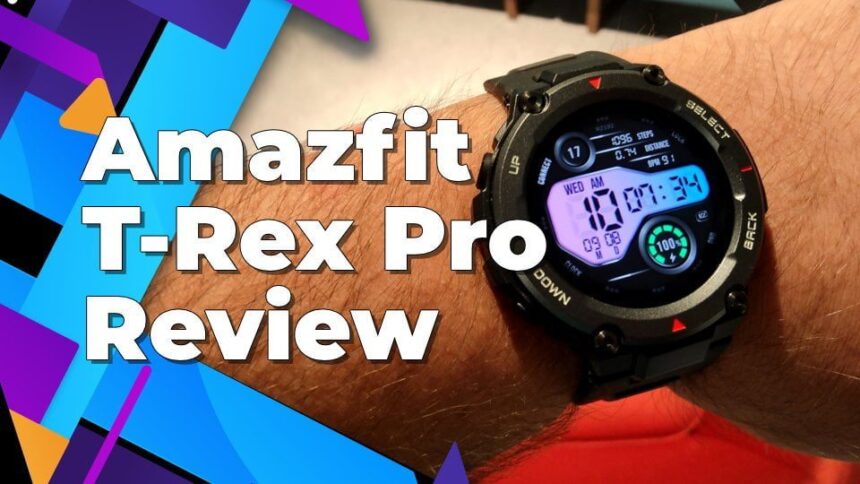 As part of its wearables series for outdoor sports, Amazfit has released the Amazfit T-Rex Pro smartwatch. As a follow-up to the award-winning Amazfit T-Rex first revealed at CES 2020, the T-Rex Pro expands its popularity. This newest edition offers even more exciting features thanks to continuous innovation by Amazfit.

Why use the Amazfit T-Rex Pro?

As part of your fitness routine, you’ve started running and going to the gym. You intend to hike and play volleyball as well. Your next step should be to map your adventures, collect data, and measure your heart rate as well as your SpO2 levels (oxygen saturation levels), especially on high altitude hikes. Amazfit’s T-Rex Pro might have a formulaic industrial design, but it’s got all that you need and then some.

This device offers 100 different sports modes – from cross-country skiing to snowboarding and hiking, and can auto-detect, a majority of them. This tracker has GPS technology to map your run though you can’t use it to navigate. Also, it’s waterproof up to 100 meters. Although the device has a bright, colourful 1.3-inch AMOLED display, its battery life can last for 18 days. I only got 11-days of battery, from 100 to 15%. It is quite an achievement at its low price, but does it serve as a fitness tracker or a smartwatch? It’s somewhat both. In addition to being able to receive notifications from your smartphone, it can control music over Bluetooth 5.0. You won’t be able to interact with notifications as much as you would with an Android smartwatch. In addition to giving you an accurate reading of your sleep, the T-Rex Pro can also tell you what time it was when you woke up.

There are few rugged sports watches at this price that cover all the basics for jogging, cycling, and hiking. However, despite the T-Rex Pro’s many positive features, I’m not sure its data is generous enough to qualify as a best-in-class product. It does all the basics very well.

Let’s jump into the detailed aspect of the smartwatch.

Although the T-Rex Pro gives you a lot of features for the price, you won’t get a wow factor. As far as appearance goes, it looks nearly identical to the original Amazfit T-Rex. Additionally, the bezel is adorned with four screws for a practical, industrial and slightly plasticky look.

Moreover, there are four large metal buttons (mode, back, up, and down) along the casing’s edge that can easily be pressed while running or while wearing gloves. With a radius of 47.7mm and a thickness of 13.5mm, the T-Rex Pro is a chunky polycarbonate gadget with a relatively masculine look, but its weight of only 59.4g means that it’s never heavy to wear.

Its rugged features include shock resistance, temperature range of -40°C to 70°C, salt spray resistance and meeting the MIL-STD-810G standard, but its most important feature is its waterproof ability down to 100m. This is twice as much as the original version could handle. In addition to the 1.3-inch AMOLED touchscreen display, the Amazfit T-Rex Pro offers 360×360 pixel resolution. It is easily readable in bright sunlight, however only if you set its brightness to its maximum setting. That affects its battery life, which Zepp rates at 18 days, but trust me, I got only 11-day’s worth. Using its 390mAh battery in practice, it lasts a little over a week, which is still very impressive.

It’s comfortable and stays in place thanks to a 22mm-wide silicon wrist strap. In addition to the case, there is a proprietary charger included in the box, and I don’t like proprietary chargers. You can see the flashing LEDs of Zepp’s new-for-2021 Bio-Tracking 2 PPG optical sensor on the sensor panel. In addition to measuring heart rate, SpO2 (oxygen saturation) is also measured. Additionally, you can find an accelerometer, a gyroscope, an altimeter, a geomagnetic sensor, and an ambient light sensor.

Short and simple, it’s a monster for gathering data. Getting started with the Amazfit T-Rex Pro

Despite its fitness-oriented ethos, the T-Rex Pro also has a few smartwatch-like features. Despite the maker’s claims, this isn’t the ultimate personal assistant. Even so, you can set it up to vibrate for incoming text messages, call reminders, and calls. You have some music control and some phone functions.

While on the move, the tempered glass touchscreen on the T-Rex Pro is responsive enough to make it a joy to use while on the go. Swapping between the watch face and shortcut control panel requires small swipes up and down. Additionally, you can turn on the light (which is incredibly dim!) and choose a screensaver and brightness, as well as engage power-saving or do-not-disturb modes. You can also set the display to be always-on by the time of day.

The claim of an 18-day battery was misleading since it only applied if you do no exercise. If you take an hour of exercise every day and use the T-Rex Pro for it, you can expect it to last about a week. If you use the haptic buzz every time something happens, as I do, or you set the display to be at maximum brightness reduces the battery life. I suggest keeping the auto-brightness on.

Despite its low price, the T-Rex Pro has arguably more features than it should. In terms of practicality, a step counter, heart rate monitor, and sleep condition display are probably what is most useful for daily use. Your heart rate is continuously tracked while at rest, and every 10 minutes when you’re active. Monitoring your sleep, from the time you fall asleep to the time you wake up, by the type of sleep you are getting. Let’s not forget the ability to track your working out routine.

In addition to calories burned and time elapsed, during and after your run, you will even have details like cadence, average stride, speed, elevation changes, and heart rate zones at your fingertips. A recommended recovery period will be displayed as soon as you have completed a run.

You can either let the T-Rex Pro automatically detect your activity or manually sift down until you find your intended workout. These are just a few of the 24 options you can choose. The system did a decent job of identifying walking and running outside but had problems identifying other activities. Therefore it’s best to select what you’ll be doing for your workout routine.

Once you complete an activity and bring the device close to your smartphone, the T-Rex Pro synchronizes with the brand’s free Zepp app. The app visually displays your current heart rate, steps, SpO2 levels, and previous workout records in a clear, colourful manner.

In the app, you’re awarded points based upon your Personal Activity Intelligence (PAI), which is an attempt at simplicity and gamification. A single numerical value is a commendable effort for users to compare their physical efforts for the day.

Even though it collects a great deal of data, the Amazfit T-Rex Pro does not use it to coach you to run faster or provide you with motivation or feedback.

Besides tracking heart rate, the T-Rex Pro can be programmed to buzz when you’re in the zone. The fitness aspect of the game is very well done. This watch is ready to go when you are, even if the battery doesn’t last 18 days as claimed. Although the battery lasts for several days, you will be required to use a proprietary cable for charging.

Even though the Amazfit T-Rex Pro tracks and maps your walk or run, it won’t provide directions. Despite Zepp’s relatively good companion app, it would be much better if the information was all passed to apps like Google Fit or My Fitness Pal.

Review: Galaxy Watch4 Classic – Everything You Need To Know!
AdBlock Detected
Our site is supported by ads, affiliate links, and sponsored content. This helps us make money to continue what we do. Please whitelist to support our site.
Okay, I'll Whitelist
Welcome Back!