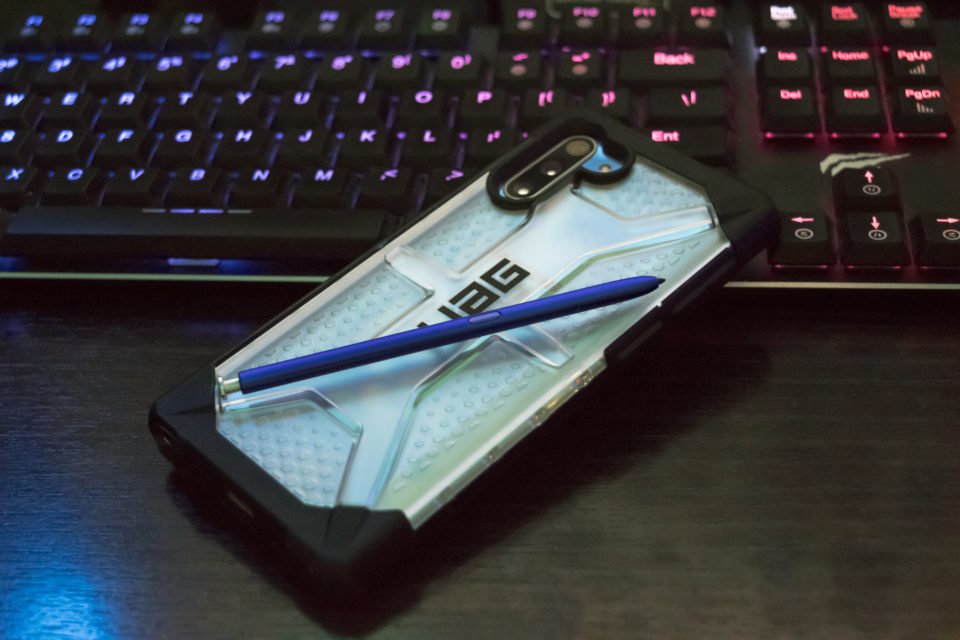 Holly Balls! It’s been ages since I’ve had a Galaxy Note device in my hands. The last time this happened was the Galaxy Note 2. It seems like ages ago!

Yup, you’ve read that right! The good old Note 2. My expectations are very high when it comes to Samsung’s Galaxy Note line of devices. The Note series is Samsung’s flagship smartphones; You’ve got to nail it down on the first try.

Let’s highlight some points so that you’ll get a good idea of where I’m going with the Galaxy Note 10.

Although the Samsung Galaxy Note 10 comes with a 3500mAh battery, it’s able to deliver all-day battery life unlike many other competitors on the market who have a larger capacity. Since the Note 10 does have the ability to fast charge, it’s not much of an issue. You can easily top yourself up for some extra oomph.

As demonstrated in the screen capture I took in the morning. I went from 7 am on a Tuesday morning to past 8 am on Wednesday morning.

Getting a full 24 hours before having to recharge my device and I even crammed in 6+ hours of screen time. All this without sacrificing anything in particular. I did what I do, use the damn thing all day.

My activities vary from watching YouTube, social media, playing games, texting, emails, browsing the web and a lot more. Like many, I also take pictures, selfies and post all sorts of stuff online.

Most of you want to know if it’ll last you throughout the day and I can say hell yeah!

The really big item that next on my list is the camera aspect of the Note 10. I’m going with the average consumer in my head and what their interested in is the camera. Can it take good pictures? Is it easy to use? How does the selfie look? Can I Snapchat with this? etc.

Note 10 is using the same combination of a 16MP ultra-wide lens, a 12MP regular lens and a 12MP telephoto lens as you would find on the Galaxy S10 device. It’s not an upgrade from the S10 so you may feel disappointed.

On the other end; These are combined to deliver a fantastic photography experience, and the camera is particularly good in its automatic mode.

It’s not the “TOP” of the line camera on a smartphone, but it holds up against even the best! It’s got enough tricks up its sleeves even to push past the Huawei P30 Pro.

The image stabilization technology is improved, and there’s a new feature called Live Focus Video, which enables you to capture ‘bokeh’ background blur effects of the kind we’re used to seeing in portrait-mode stills but in videos.

On the Note 10 this is all done through software, but the Note 10 Plus uses a DepthVision lens to work its magic – so if this sounds like a must-have feature for you, it’s likely to work better on the larger phone.

The design aspect of the Note 10

The Note 10 is slightly smaller than it’s the previous generation the Note 9. It fits nicely in my big hands. It is definitely smaller than the Google Pixel 2 XL. I may opt to go for the Note 10 Plus for myself in the near future.

The Note 10 has a 6.3-inch AMOLED display with a Full HD resolution, coming in at 2280 x 1080 pixels, with 401 pixels per inch. It includes HDR10+ technology, and considering that Samsung hasn’t didn’t go for a QHD display here I’m impressed with how the display looks. 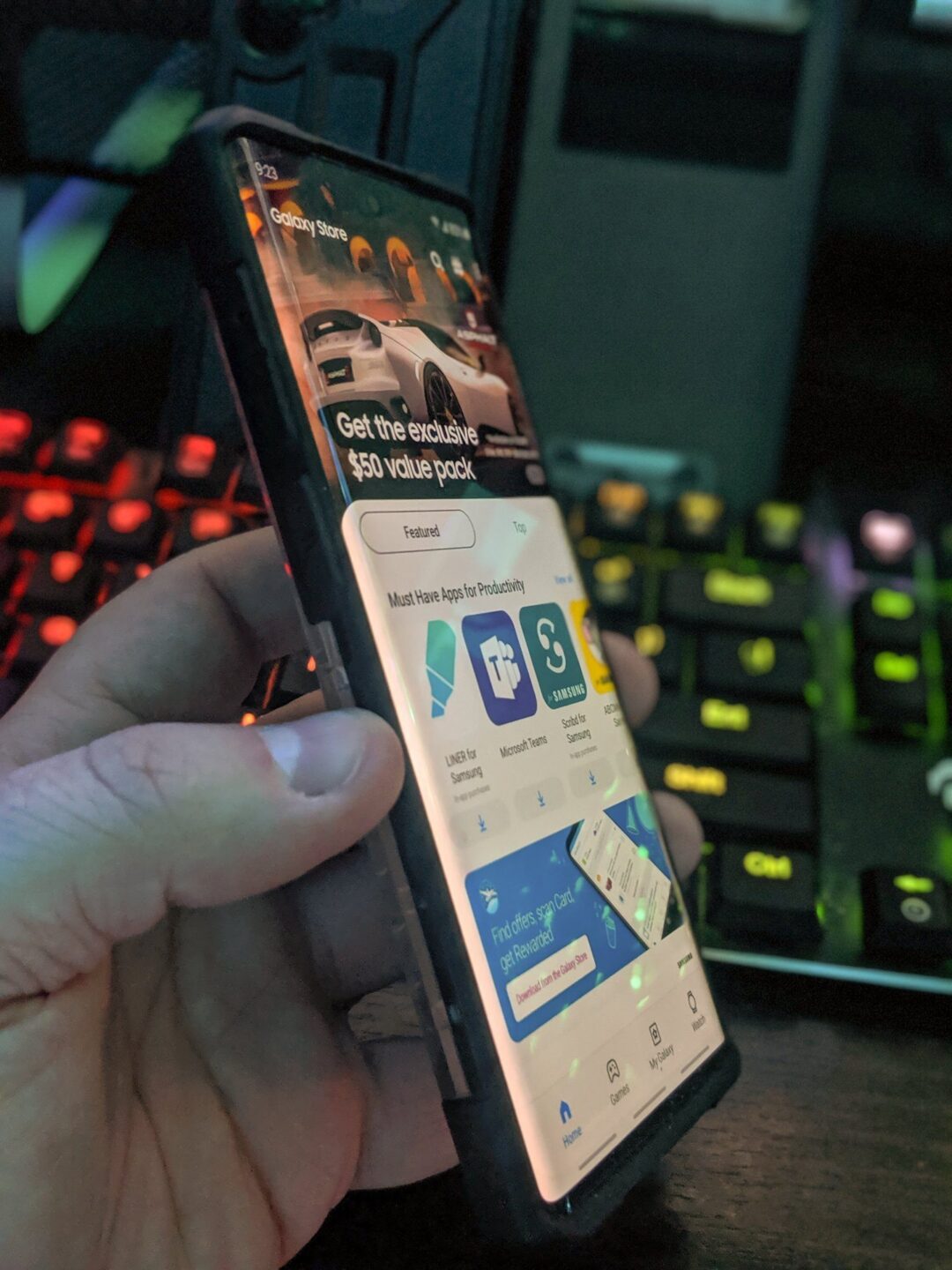 The most noticeable change compared to the previous generation of the Note line is the introduction of a full-screen display with a punch-hole cut-out for the front-facing camera at the top-center of the screen.

Haha! I can see people being triggered with the camera in the middle of everything at the top, but you really don’t notice it when you get yourself acquainted with the Samsung Galaxy Note 10.

The bottom edge of the Galaxy Note 10 house the USB-C connector in the center, with a speaker and the S-Pen slot sitting to the right of it. The top edge of the phone is uninterrupted aside from the SIM tray. 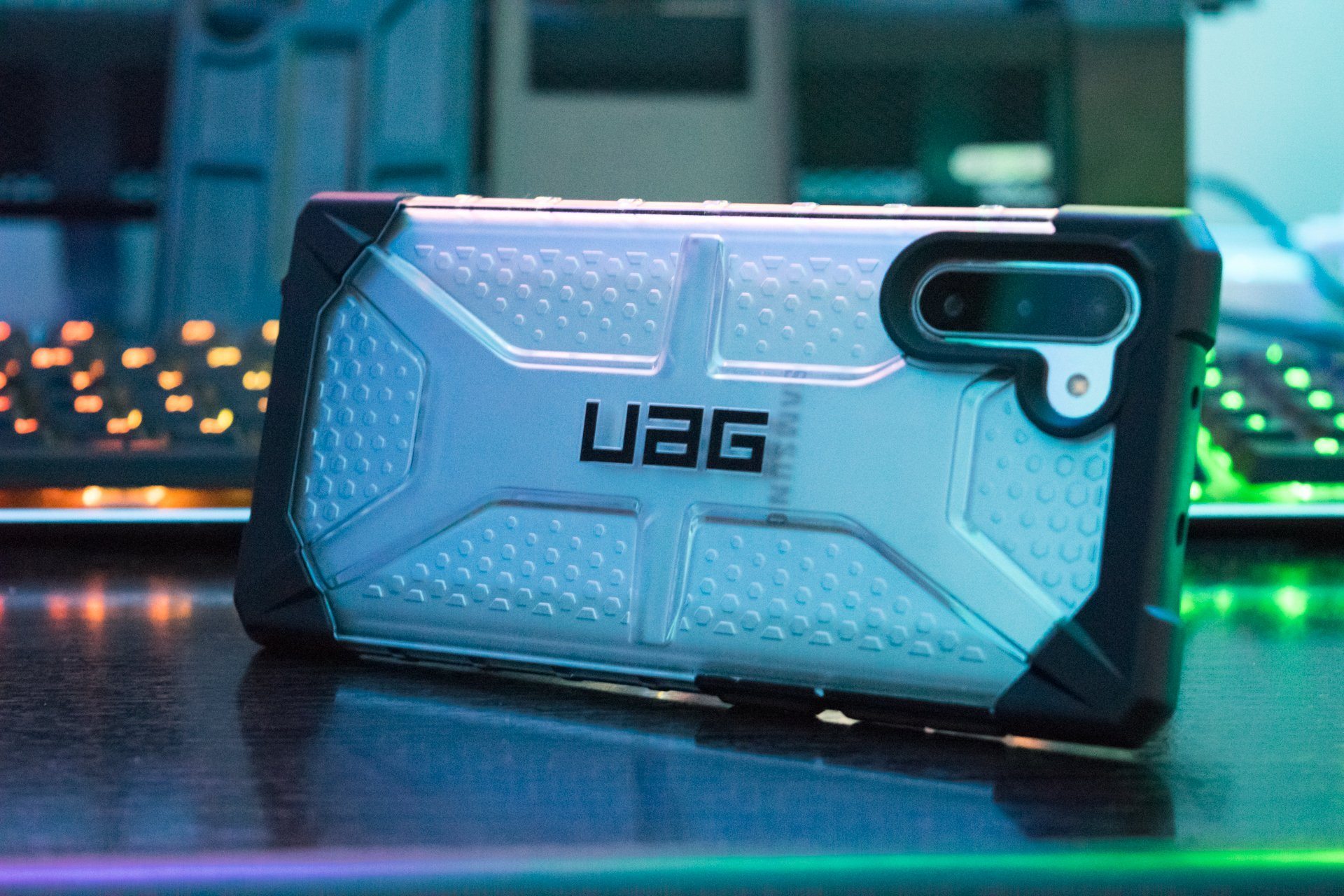 The frame of the phone is a premium metal, while the back is made of glass. The colour options are Aura Glow (a combination of blue and white), Aura Black and Aura Pink. I decided to slap on a case that would still let the device shine through while maintaining a rugged aspect.

Just look at those cameras and the nice back of the Note 10?

The magic of the S-PEN!

The magic of the S-PEN is the standout feature; The fact you can just take notes on the screen without having to turn it on properly. Useful in meetings when you need to quickly scribble something down and you don’t want to have to move through a variety of menus or bring your laptop.

Let’s face it, I hate going to meetings and this is a minimal way of still having access to notes, writing down notes and accessing work-related content.

Samsung has also brought a variety of gesture controls to the pen. These allow you to control certain apps, such as the camera, video or gallery, by moving the S Pen in different directions. I’m still getting used to this, but I doubt I’ll be using it for more than scribbling some stuff. 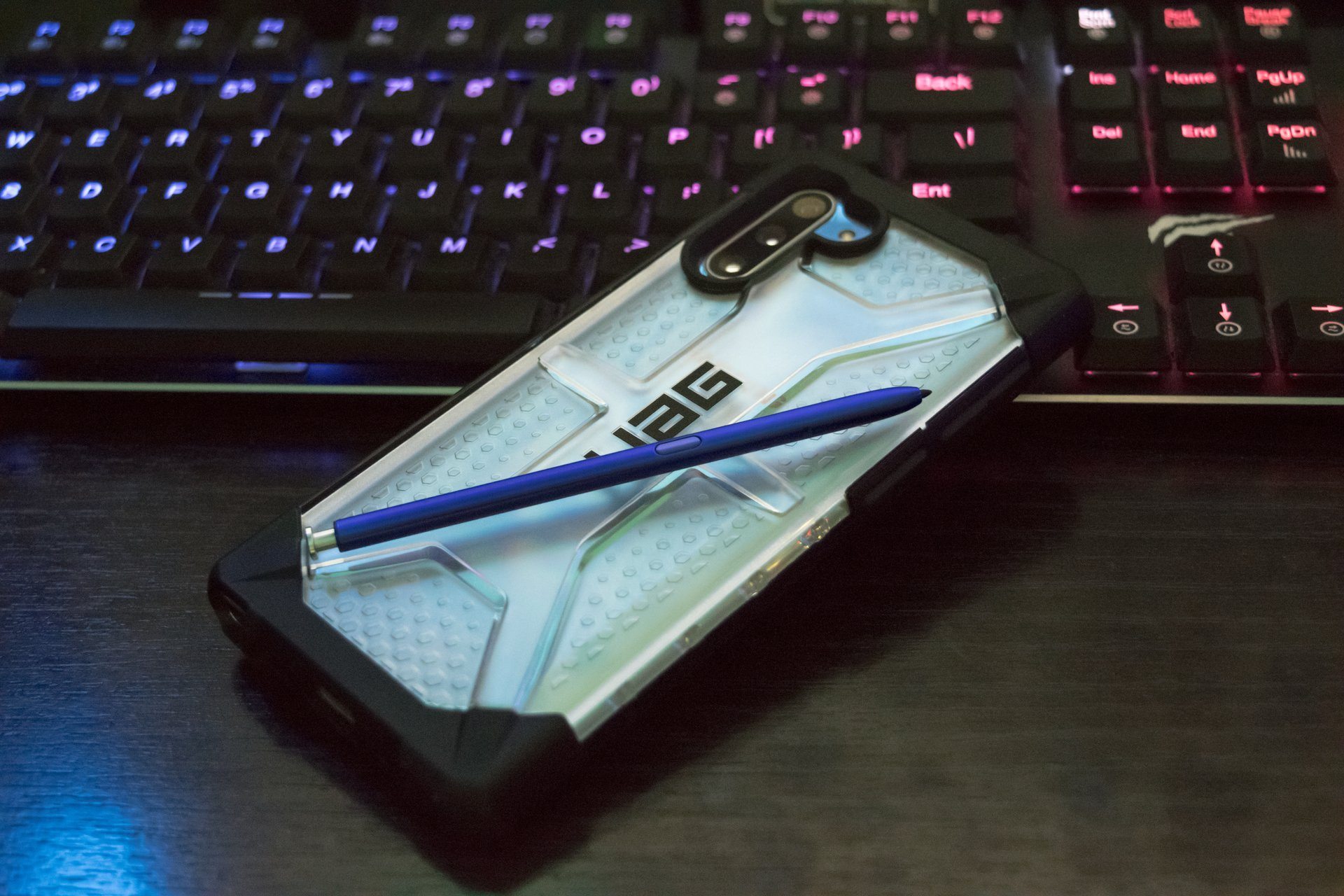 The interface isn’t close to the one that Google Offers on the Pixel line of Android smartphones. Samsung has taken a different approach and one that isn’t as heavy as past iteration. The OneUI is still fairly new and version 2 of the UI is just around the corner.

The cluttery mess of menus is gone, the refresh of the interface is fresh and fun. The included dark mode makes me happy. The experience is very fluid, swiping away and changing the menu options is as smooth as it needs to be.

It’s breath of fresh air to use the Note 10. My last hands-on with a Samsung device in this series was the Note 2 and then I skipped every generation thereafter. The Note 10 has reached a new level for me and I’m enjoying it.

What’s been crammed inside?

I’m using the Snapdragon 855 variant which comes loaded with Android 9 with September 2019 security patches, 8GB of RAM, 256GB of storage. It’s also equipped with all the Canadian network bands so that it can be used on any carrier networks in Canada. I’m on the FIZZ network and I’ve got excellent coverage anywhere I’ve been and this includes the “boonies”.

On the upside, we have a great set of speakers on either end. I personally find them to be quite loud. You’ll have no trouble listening to anything on Netflix, YouTube or Twitch. There’s a downfall, if you are actively looking for a device with a 3.5mm jack, you may want to look elsewhere. Samsung has removed the analog input.

The fingerprint sensor is on the front under the glass, it’s done in a similar way to other devices and I find this one to be very slow.

One element of the Note 10 that annoys me is the volume and power button are on the left side.