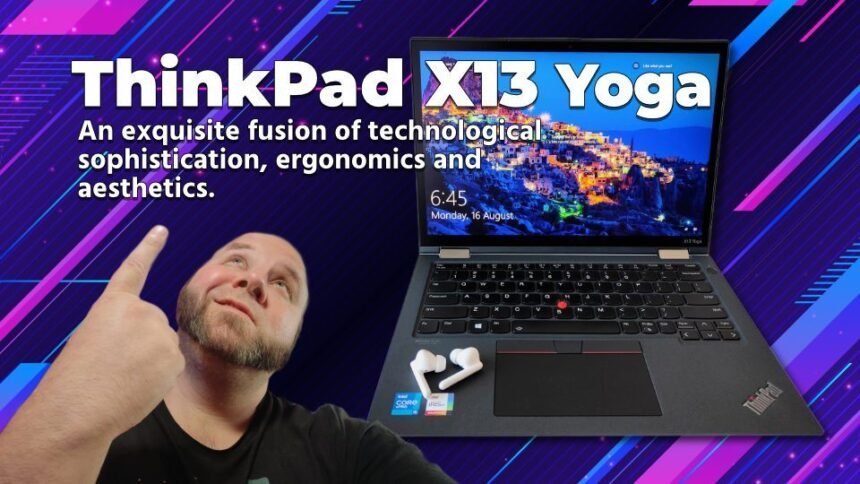 SHARE
Contents
The ThinkPad X13 Yoga G2 offers an exquisite fusion of technological sophistication, ergonomics and aesthetics.SPECIFICATIONAppearance/DesignThe Display ExperienceCan it go? Can it move? Can it perform? YES!ProcessorMemory/StorageGraphic capabilitiesBenchmarksWhat’s the Battery Life?What’s the Price?What’s the review Verdict?Can't read the articles right now? Save it for later! Subscribe to Android News & All the Bytes by entering your email — so you can read it during your downtime!

It offers an exquisite fusion of technological sophistication, ergonomics and aesthetics. The company unveiled this device at the ThinkPad 2021 spring launch event in Beijing with the theme: Hello Pioneer.

Lenovo is one of the top PC makers in the world with over 60 years of experience. It always tries to improve its devices to make them more affordable for more people around the world. With this in mind, Lenovo launched three new flagship devices, this time, I’ve got the ThinkPad X13 Yoga G2 for a review! The Lenovo ThinkPad X13 Yoga Gen 2, on the other hand, provides the option for a classic ThinkPad design. It’s overall black, with a few pleasing colour accents – one of them being the red TrackPoint with its associated buttons, along with the silver hinges and the Lenovo and ThinkPad logos. As with the ThinkPad X1 Yoga, the front of the case tapers. As a result, the ThinkPad is thinner in laptop mode, but it has a gap between the base unit and the display back in tablet mode.

Should you worry about this? I worry about the wear of the hinges and how long they will maintain their sturdiness. Without using it over a long period, I can’t tell if it will survive the test of time.

As with the ThinkPad X1 Yoga Gen 6, the connectivity is similar, which is why legacy ports such as HDMI and USB-A are present. In addition, it has integrated 4G LTE, which means you can insert a data-enabled SIM card and connect to data networks such as Bell, Rogers, Telus, Fizz, etc.

There is no option for a 1080p camera like in the previous ThinkPad X13 convertible – a 720p webcam with a noisy and blurry image is standard. It’s 2021, and there should be nothing but 1080P on all laptops, including good low-light options. It’s time to retire the 720P cameras from laptops as we move forward into the future.

Some accessories are included: A 65-watt power adapter with a USB-C port and a small stylus that fits into the slot near the right side edge. An excellent feature of this tablet is its WQXGA display! WQXGA resolution is in use for the first time on a ThinkPad X series model. Changing the aspect ratio to 16:10 completely changes the display lineup on the X13 Yoga G2. Unfortunately, there is no longer an option for the former’s 4K UHD OLED panel.

In addition, the full coverage of the sRGB colour space allows for the editing of images and accurate colour reproduction in everyday browsing and office use. The brightness and contrast of the display are good, but the display contrast could be better.

I know that a majority of consumers won’t even look beyond what they see. You need to have a sharp image, you want a bright display even when you are outside, and ultimately you want to enjoy your experience.

The display will give you all the glams you need. It’s bright, vivid provides astounding viewing angles for both works and watching your favourite YouTube creator. Can it go? Can it move? Can it perform? YES!

Based on the Tiger Lake-U generation, the Intel Core i5-1145G7 is a power-efficient quad-core SoC for laptops and Ultrabooks. With its four Willow Cove processors, the system offers eight threads as a result of HyperThreading. Depending on the setting, the base clock speed can range from 1.1 GHz to 2.6 GHz. In every case, the Boost clock speed is specified at 4.4 GHz.

Toshiba XG6 KXG6AZNV512G is a fast high-end NVMe/PCIe SSD for laptops. It is available as an M.2 2280 card and uses a Toshiba 96-layer 3D TLC flash. The NVMe benchmark tests showed a read capability of over 3200 MB/s, while the write speed achieved 2650 MB/s. Based on my benchmarking results, I found the SSD to be neither sluggish nor exceptionally fast.

This test device comes with integrated Intel Iris Xe Graphics G7 96EUs. In comparison to its predecessor, the new system performs much better. In addition to the improved GPU, this is also a result of the faster LPDDR4X RAM. The GPU requires access to the main memory since it is not equipped with its own.

The X13 Yoga G2 offers significantly better gaming performance than its predecessor thanks to its Xe graphics. Even so, current games cannot go beyond the medium detail level. If playing Warzone is a must you may want to look at putting the settings between low and medium.

The PCMark10 score is good, coming in with 5244, which is better than most office laptops. Laptops like this one can easily handle the day-to-day tasks that most of us do regularly. PCMark10 is a set of tools that determines its office use or everyday use and compares it to other systems.

When it comes time to do a bit more intensive work, such as Cinebench, the laptop in multi-core averages 4733 and single-core 1347 points. Cinebench works based on graphic render over CPU processing.

Neither lag nor screen artifacts will be an issue. A perfect evening entertainment choice for the family or the everyday hustle and bustle of work. In my experience, I could easily get eight hours or more of battery life using the laptop. Internet browsing, email, image editing, video chatting, making phone calls, and watching some shows are included in this category. You directly affect how long your laptop battery lasts by how you use it.

Lenovo’s online store offers several configurations of the ThinkPad X13 Yoga Gen 2 starting from around $1691.40 for the base version with the Core i5. I found that a version that features almost the same components as my test configuration (Core i5-1145G7, WQXGA display, 16 GB RAM, and 512 GB PCIe SSD storage) is priced at about $2231.40.

The X13 Yoga Gen 2 is a great office device. It’s Lenovo’s business-focused convertible laptop that is below the flagship ThinkPad X1. With a resolution of 2560×1600, the 13-inch display in the 16:10 format is an important component. In contrast to the 4K UHD displays in the X1 Yoga, this resolution achieves a good balance between image sharpness and energy consumption.

I did find myself missing the SD card reader. One of the elements I do enjoy as I do use SD cards often. Since I’m resourceful, I have an SD card reader that attaches to the USB-A port.

In terms of computing power, mobility, battery life, expansion capability, design and workmanship, and cost-effectiveness, the Lenovo ThinkPad X13 Gen 2 is the perfect balance between these aspects.

Check out the FLAGSHIP of the Yoga line ThinkPad X1 Yoga Gen 6! Samsung Galaxy A52 5G review – Powerful midrange you might just need
AdBlock Detected
Our site is supported by ads, affiliate links, and sponsored content. This helps us make money to continue what we do. Please whitelist to support our site.
Okay, I'll Whitelist
Welcome Back!