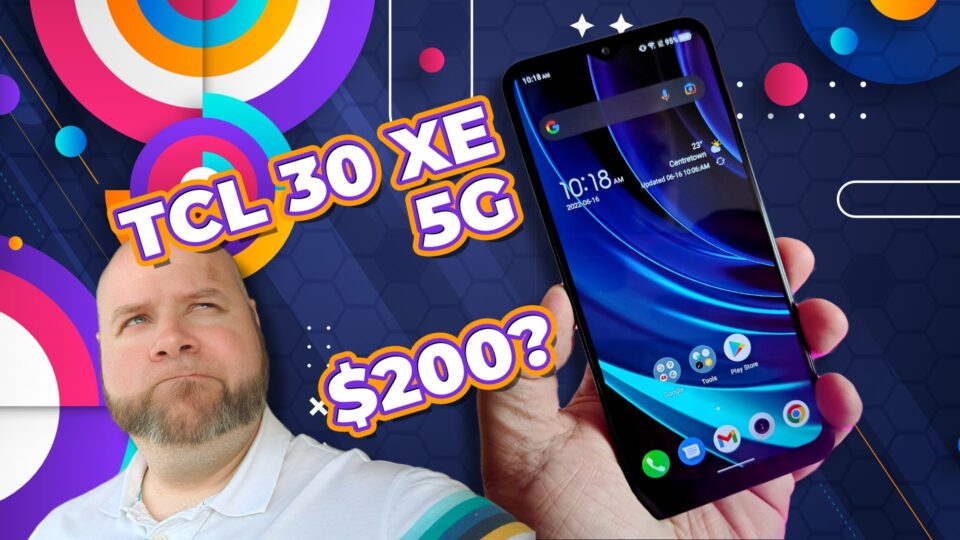 Budget-friendly $200 smartphones may not get as much press or coverage as their pricier counterparts, but that doesn’t mean they aren’t popular. $1600 is a lot to spend on a phone unless you really like it and can get it subsidized while paying it off part of your monthly bill. At $200 (or CAD$350), the TCL 30 XE 5G feels solid and performs similarly to Motorola’s G series but with 5G data speeds.

In the United States, you can find it at T-Mobile and Metro for as low as $199. While if you’re from Canada, you can check out Bell, Fido, Fizz, Koodo, Rogers, Telus, Virgin Plus, and Videotron. Pricing varies between carriers, but pricing averages CAD$350. The bottom of the phone has a USB-C port and speaker grills. The sound isn’t spectacular, but you shouldn’t expect it to be at this price point. Watching streaming TV shows or movies on this smartphone is tolerable. It isn’t great. It doesn’t have fast charging capability either—another sacrifice to keep its price low.

You will find the SIM card tray on the left side of your phone and a MicroSD card slot above it; This lets you expand the storage by whatever size MicroSD card you want to add to the phone; this is another feature that most high-end expensive phones have lost over the years, but it is still nice to have.

The power and volume controls are on the right edge of the device; they are closer to the mid-point of the device than most, making them easier to reach.

Ever wanted a fast screen that’s fluid in a budget smartphone? TCL did it on the 30 XE 5G with a 90Hz refresh rate by NXTVISION; This makes the device feels premium in the user experience department. Enhanced responsiveness with 180Hz touch sampling rate and a 1600 x 720 pixel, 6.62″ display.

The display is excellent indoors, with plenty of brightness and contrast, as you can see above. I find that using the device outdoor is just as good. If you happen to be in direct sunlight, as with most displays, you will notice that it can be somewhat harder to see some aspects of the screen. Still, it’s totally usable and much better than some major brands.

The camera array on the back of the phone looks mighty, but it’s not as riveting as you might think. The 2MP macro camera and depth sensor are just part of the design to make the phone seem more appealing to consumers. Only the 13MP camera is worth using. But even that’s not entirely terrible, and if you’re not a huge photography fan, it should be more than enough for most. If you look at the sample of pictures I have, you can judge for yourself.

I would not use this phone to take pictures at night or in a low-lit environment. You will get very grainy photos. Photos taken with the 13MP camera are acceptable, though you’ll want to use it in well-lit areas. RAW isn’t supported, so JPGs are the way to go, but still, for social media and web sharing purposes, the camera is fine. The background blur that uses the 2MP depth sensor is not the greatest if you want to have ugly edge masking. The Macro camera lets you get close to your subject for low-resolution 2MP photos. Low-resolution image quality defeats the purpose of having a Macro mode on your smartphone camera.

You get a pretty sweet battery life from the 4500mAh cell. It should provide around 17 hours on one charge (more or less). Forget about wireless charging. Wired charging delivers a whooping 18W which is more than some. There’s nothing earth-shattering here.

Some people may say that it’s not worth spending $200 (CAD$350) on a smartphone, but at the end of the day, you have to figure out what kind of features and capabilities you need. If you can’t afford the crazy prices of $700+, require a phone that will last you through the day, want to plug in your headphones or add extra storage, this might just be it the TCL 30 XE 5G!

The device doesn’t provide you with the best camera. You only get a good camera. It doesn’t offer you protection against water, and you won’t get wireless charging or fast charging. Mind you, you still get 18W of charging power, which is more than some.

The TCL 30 XE 5G is not missing much to tout it as excellent. If you make adjustments with the cameras, the camera software, add NFC, and expand the base storage to 128GB, then we have a solid contender to take on the behemoths.