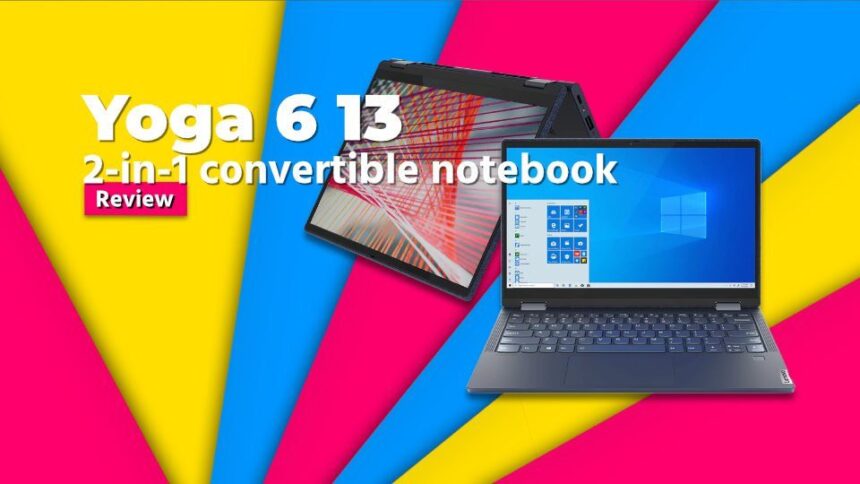 SHARE
Contents
Review Yoga 6 13 Ryzen 7 5700UThe Price Point & AvailabilityLet’s look at the design – Yoga 6 13Diving into the Performance of the Yoga 6 13Cinebench R23PCMark10GamingBattery LifeFinal Thoughts Yoga 6 13 ReviewCan't read the articles right now? Save it for later! Subscribe to Android News & All the Bytes by entering your email — so you can read it during your downtime!

Those of you seeking that perfect laptop for “you,” where one series is too expensive, but the one-step more affordable option isn’t worth it, can opt for a Lenovo Yoga 6 (13). This little notebook fills the gap for people who need a fast, agile notebook without spending too much money. Sometimes, it’s the in-between two series that fills the gap in terms of what we need.

Things got interesting when AMD released its 7nm Zen 2 mobile processor. It opened the doors to creating new types of system configuration between the low and high end. The review unit I’m using from Lenovo is the Yoga 6 13 2-in-1 13.3″ Touch Screen Laptop with an AMD Ryzen 7 5700U CPU, 16GB Memory, and 512GB SSD in Abyss Blue with Fabric Cover. The Yoga 16 13 is available through a lot of different retailers. Its configuration varies depending on its internals. The one I have you can get from Best Buy in the US for $949.99. While if you are shopping in Canada, you can get the same thing with less RAM for $1200.79 at Best Buy.

Newegg and Lenovo also carry this model and configuration.

Lenovo uses cloth material to dress up this line of laptops. A denim-like cover protects any metal underneath the Yoga 6 13. It looks stylish while also preventing scratching. However, the fabric may become dirty, torn, or stained over time. It’s still just speculation since I didn’t see any of this. It delivers a shape of 17mm to 18.2mm in terms of body dimensions. One-handed opening of the lid isn’t possible, as you might expect. Even so, the frame is extremely sturdy, barely flexing at all. The keyboard here has a clicky response and decent key travel. Two speakers are flanking the keyboard, as well as a decent touchpad.

At the bottom is a panel with ventilation grills. A collection of fins located just beneath the display blows the hot air out of the device backwards. Trust me when I say it gets plenty hot down there!

It’s a bit limited when it comes to port choices here. The notebook has two Type-A 3.2 (Gen. 1) ports and two Type-C 3.2 (Gen. 1) ports that can charge the Yoga 6 13 and output a DisplayPort signal, in addition to an audio port. As a side note, the right side contains the Power button, which is tactile.

The Lenovo Yoga 6 13 features a Full HD IPS display. Delivering a resolution of 1920 x 1080p, it offers 13.3 inches of real estate with a screen ratio of 16:9; Leading to a better viewing experience for the user. Diving into the Performance of the Yoga 6 13

Before running any performance benchmarks below, I set my unit to Extreme Performance mode through Lenovo Vantage. The laptop has been under stress for the last 24 hours before any testing.

In contrast to most convertibles, the internal display supports AMD FreeSync, which eliminates tearing when gaming.

Cinebench aims to see how well all the cores of the processor handle themselves under load. The higher the points, the better it is. To give you some perspective:

It enables you to calculate the effectiveness of a laptop in an office setting. It arrives with an overall score of 5085 points. I consider any score above 4000 points to be excellent for an office device.

Running the 3DMark suite of tests with Time Spy, I’ll be able to determine how the Yoga 16 13 performs under a gaming setting. By default, Time Spy will run in 1080P Ultra settings and render less than 30FPS. Running Night Raid, for home computers with integrated graphics, we reach an average of 63 FPS.

On average, you can play video games that are not taxing on the graphic processor of the laptop. Consider the device and the settings to which you’ll play games. High-demanding games should play well on LOW settings such as GTA V, which you’ll get an average of 60 FPS, or Final Fantasy XV with 26.1 FPS. To determine how long the battery takes to deplete, I enabled the “better performance” profile in Windows and set the brightness to 70%. I rebooted the computer, left all the usual Microsoft app that start at bootup, and played my video continuously.

I’m getting an average of 8 hours worth of battery power playing a video continuously; This translates to 13 hours of work usage. Getting every bit of power out of this machine will let you keep yourself in the zone!

There are advantages and disadvantages to the outer lid fabric compared to plastic and metal. Because of the rough texture, fingerprints and other blemishes can be more difficult to spot than they are on most other laptops. However, the fabric is difficult to clean and is likely to absorb grease and dirt over time, causing an accumulation of grime.

In addition to the fast AMD processor and the 1080p touchscreen with accurate colours, other notable characteristics of the Yoga 6 13 include its comparable price to Intel-powered Ultrabooks. The model I have comes with 16GB of RAM, which is not upgradeable.

Although this notebook’s cooling setup is not very efficient, it was perfectly capable of doing the job. The heat distribution was fine for hours of having it on my lap. Under heavy loads of files being read and copied, the NVMe hard drive provided a snappy experience and never slowed down.

The convertible notebook is a solid offering with good display colours and solid performance so long as you are not looking for IR, Thunderbolt or HDMI.

Are You Running A Small Business? Ways To Improve It At A Low Cost
Next Article

How Can Technology Power Your Company’s Revenue?
AdBlock Detected
Our site is supported by ads, affiliate links, and sponsored content. This helps us make money to continue what we do. Please whitelist to support our site.
Okay, I'll Whitelist
Welcome Back!