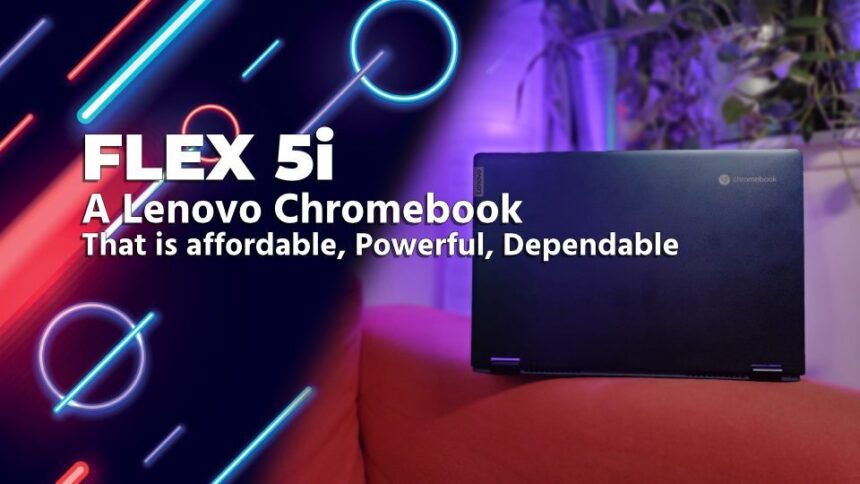 SHARE
Contents
Flex 5i Price and availabilityFlex 5i Design and PowerShould you buy it?Can't read the articles right now? Save it for later! Subscribe to Android News & All the Bytes by entering your email — so you can read it during your downtime!

Among the best Chromebooks on the market are from Lenovo, ranging from compact companions to large, fully-featured machines. Chromebooks like the Lenovo Chromebook Flex 5 series have been the hottest sellers for almost a year.

It’s no surprise I’ve got the next-gen in my hands with the Flex 5i. New processors, different storage configurations, and the Abyss Blue colour are some of the new features. These are minor changes that turn excellent into perfect.

Flex 5i Price and availability

Flex 5i Design and Power

The abyss blue colour resonates with this deep-sea-like feeling. It’s a very well-crafted colour. In the interior, the grey keyboard contrasts well with the blue to create a cohesive look without clashing. The Flex 5 has the same ports as last year: USB-C on both sides, microSD, and the audio combo jack on the left. On the right are the buttons and the Kensington lock port.

As with last year’s Flex 5, Lenovo retained the same weight, dimensions, connectivity, and overall performance. In reality, you’ll barely notice the difference in Chrome OS’s performance after upgrading to 11th Gen Intel processors. Even though Chrome OS is written to work on more modest hardware, both the Intel 10th Gen Core i3 and 11th Gen are capable chips, providing you don’t use Linux or keep over a hundred tabs open at once.

I’ve spent weeks typing on mine and find it quite comfortable. If you come from working with a mechanical keyboard daily, the chicklet keys might feel bland. While the trackpad is relatively smooth, the palm rests are perfectly textured and have just the right amount of anti-slip.

For my daily hobby, watching movies, listening to tunes, watching Twitch, and head-banging activities, the Flex 5i has been great. My review unit has 4GB of RAM with the Pentium processor, so it handled 20 tabs just fine. Like the Flex 5 before it, the webcam is what it is on laptops, useable.

The Flex 5i had to give up something to bring a more powerful processor while maintaining the same size and weight; This came at the cost of battery life. While I consistently for 6-7 hours worth of battery life, this can vastly vary depending on the activities you’ll undertake.

This device has the same display as last year: a 13.3-inch 1920×1080 pixel, 250 nits glossy IPS touchscreen. The light bleeding on my screen was primarily at the top-left and top-right.

Given that the battery is smaller, I can understand why Lenovo chose to stick with the display format. I would, however, like to see an upgraded display panel. Considering we got a better processor, let’s take the Flex 5i to new heights.

Should you buy it?

If you like Chromebooks, something that’s dependable, long-lasting and will keep driving until you kill it? Then this is for you. I’m a power user, and it can handle what I typically do without blinking. Not only that, but it’s pretty affordable and gets the job done.

On the other end, if you’re all about hardware specs, then you might want to look at the other models in this line. Ultimately, this is a good Chromebook that looks good on its own but is overshadowed by its bigger brother, the Flex 5.

What You Need for Strong Cybersecurity in Business
AdBlock Detected
Our site is supported by ads, affiliate links, and sponsored content. This helps us make money to continue what we do. Please whitelist to support our site.
Okay, I'll Whitelist
Welcome Back!