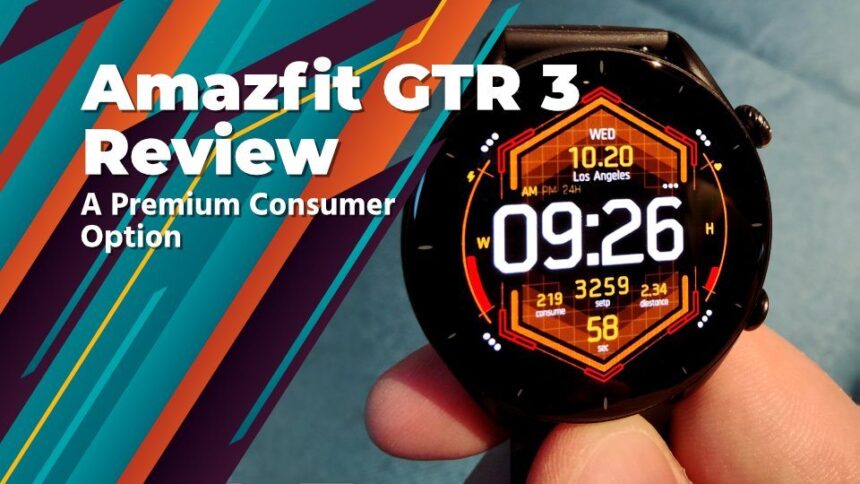 SHARE
Contents
Amazfit GTR 3The DesignCan the Amazfit GTR 3 be considered a good fitness watch?Step tracking and activity monitoringHeart rate sensorSpO2 trackingSleep monitoringDo the smartwatch functions work well?How long will the battery last?Final thoughts on the Amazfit GTR 3Can't read the articles right now? Save it for later! Subscribe to Android News & All the Bytes by entering your email — so you can read it during your downtime!

The Amazfit GTR 3 lacks premium features, making it difficult to justify its price when you simply offer fitness bells and whistles.

With improved fitness tracking and a high-quality display, Amazfit latest smartwatch moves into a premium category. Nevertheless, quality hardware is not enough to compete. Amazfit GTR 3 struggles to compete with premium alternatives due to its lack of polish and unintuitive app. Not to mention the smartwatch functionality that many are looking for at this price point. The Amazfit GTR 3 comes in at a whopping US$179.99.

Amazfit fitness wearables from Huami have been gaining ground by offering value, a competitive advantage. With the GTR 2, the company improved the feature set with Alexa compatibility, stress detection, and a new BioTracker sensor. Implementation of these features was somewhat rough, unfortunately. The new BioTracker 3 sensor in the Amazfit GTR 3 aims to address those missed targets. I’m going to touch on many different aspects of this fitness smartwatch in this review, and hopefully, you’ll see something that will work for you. As with the GTR 2, the Amazfit GTR 3 maintains its classic style. This year’s model has a much larger display than last year’s.

A lightweight aluminum shell houses the large display, which adds to the device’s lightweight of 32g. At the two o’clock and four o’clock, positions are two buttons that you can be program as shortcuts to any of the apps on the watch.

UI elements like the app drawer can be scrolled through easily with the first button and even long lists within specific apps, such as browsing your workout history via rotation. The rotating button was an excellent addition that quickly became second nature. It doesn’t seem premium at all, and the crown lacks any resistance, which only adds to the cheap impression.

The watch strap is attached using a quick-release assembly so you can swap it for any third-party band. I received a black silicone band with my Amazfit GTR 3 review device, but the company will offer additional options to fitness enthusiasts. To achieve that look, I recommend swapping out the silicon strap for a higher-quality third-party option.

In addition to being bigger and thinner than before, the display is brighter and has a faster refresh rate. It’s particularly noticeable while out in bright daylight or when actively engaging in activities.

During testing, I wore the watch both during the day and at night and found it very comfortable for all-day wear. No complaints. Can the Amazfit GTR 3 be considered a good fitness watch?

Featuring the updated BioTracker 3 sensor, the Amazfit GTR 3 is capable of tracking heart rate and measuring blood oxygen levels. The ability to track heart rate levels while swimming is a significant improvement. Additionally, the company claims faster GPS locks and more accurate tracking, something I previously found to be lacking.

In terms of accuracy, the GTR 3 is comparable to other fitness watches. For me, it’s not an accurate measure of fitness but rather a way to ensure you get up and move every day. I promise the watch will alert you to get moving if you don’t.

It is more useful to gauge fitness levels through Personal Activity Intelligence (PAI). In the metric, heart activity levels are used to calculate a rolling score out of one hundred every week. You have to push yourself harder to succeed, making it an interesting way to gamify fitness. Additionally, PAI is not simply an activity-based score; it changes with your heart rate levels and gets harder to achieve. To obtain those points, you will have to push yourself harder as you get fitter.

Personally, I prefer standard measures like pace and timing, but PAI can be useful for individuals who want a little extra motivation.

The watch features more than 150 workout modes, such as hiking, yoga, and an e-sports mode that measures heart rate and stress levels while you compete. It’s a nice addition, even if it won’t make a big difference to your daily activity score. Amazfit reports that the GTR 3’s heart rate sensor is significantly improved. In my experience, GTR 3 compared well with other devices, even though I don’t have a heart rate monitor strapped to me; Data were similar and relatively accurate for the majority of the test.

The Amazfit GTR 3 is a consumer device, so accuracy should only be seen as an estimate. The GTR 3 does not feature ANT+ sensors, so serious athletes should look into higher-end options that accept a chest strap for a more precise reading or experience.

In recent years, fitness watches have integrated blood oxygen monitoring as a standard feature. Despite being less accurate than dedicated SpO2 devices, I have previously found wrist-based measurements ok when taking spot measurements.

My saturation levels average about 91%, but when using the Amazfit GTR 3, they often reached 95%. In a controlled setting, a doctor’s office is the best place to make an accurate diagnosis. It displays the automatic readings on a graph that can be divided by days, weeks, months, or even years but offers little information about what it means to the user.

Sleep monitoring metrics are captured by the GTR 3, but not all of them can be accessed on the watch. Using the Zepp app, you can learn more about sleep stages such as light, deep, and REM. Sleep monitoring is integrated with the watch’s sleep breathing functionality to help detect sleep apnea. It may work, although I cannot verify its accuracy.

Do the smartwatch functions work well?

As far as the Amazfit GTR 3 is concerned, it’s not so much a smartwatch as a fitness tracker. It comes with pre-installed apps for tracking fitness, alarms, calendars, and basic functions like the compass.

It’s powered by Amazfit’s Zepp OS. This operating system runs on FreeRTOS and is said to be less resource-intensive and more battery-efficient, although the changes might not be immediately apparent. With Zepp OS, Amazonfit also intends to open the developer ecosystem to third parties and support them with internet-connected applets.

There will have to be some waiting to see whether the ecosystem flourishes or fails at launch.

The GTR 3 can receive notifications from smartphones. Despite that, the notifications on this watch cannot be acted upon, as they do on many other fitness watches. You can’t even expand on subject lines when you’re using most messaging apps, except for a few select apps with canned responses. The experience is far from ideal.

When connected to the internet, the watch does, however, support Alexa. Your phone can relay instructions to Amazon servers by tapping the watch or setting up one of the pushers as a shortcut. It works, but I found it not very responsive. The Alexa functionality relies on having your phone nearby, so most people will find it easier just to pick up their phone. How long will the battery last?

According to Amazfit, the GTR 3’s 450mAh battery lasts two weeks; I think the watch will do that. After a couple of weeks and with all the health-tracking settings activated, I expect the GTR 3 to last at least two weeks. While Amazfit claims a lot of battery life, its estimates are based on the always-on display off – a feature that consumes a lot of power.

You get standard magnetic chargers with pogo pins for charging. The journey from zero to one hundred takes around two and a half hours.


Final thoughts on the Amazfit GTR 3

With the Amazfit GTR 3, Huami has attempted to create an all-around running watch that will appeal to everyone. But there are a few compromises that make it hard for me to recommend this watch over others. While it provides some good fitness information, it lacks in the smartwatch department. It’s hard to justify the price tag when you get into this category. When a watch such as this one hits the market with a price tag of US$179.99 you have to wonder.

Available at Amazon US.

A significant step-up for the brand is the improved GPS accuracy, as well as the heart rate tracking, and the fitness features still add some value. However, this price hike coupled with top-tier competition is not easy to swallow. A competitor in this field that has achieved both fitness and smartwatch combination is Mobvoi for just about the same price. If you decide to go with the Amazfit GTR 3, it won’t be a mistake, but the alternatives might make you second guess your decision.

A Guide to Wonderful Gaming Tips You Can Use for Success
AdBlock Detected
Our site is supported by ads, affiliate links, and sponsored content. This helps us make money to continue what we do. Please whitelist to support our site.
Okay, I'll Whitelist
Welcome Back!