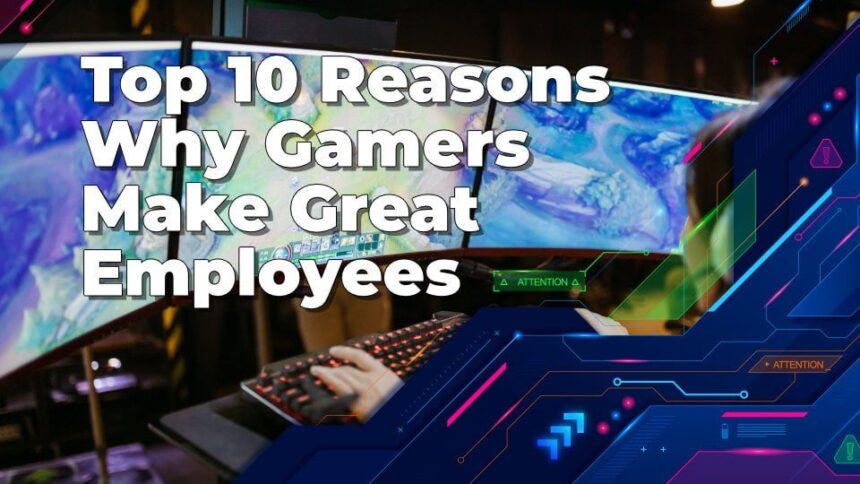 SHARE
Contents
They learn new skills and concepts quickly:Flexible:Open to teamwork:Fluid intelligence:Good at problem-solving:Innovative:Creative:Mature:Empathetic:Resilient:Employers should advance to the Next LevelCan't read the articles right now? Save it for later! Subscribe to Android News & All the Bytes by entering your email — so you can read it during your downtime!

Gamers are often stereotyped as lazy, anti-social loners. But the skills, like problem-solving and critical thinking, that make gamers successful in virtual worlds can translate to success in the workplace. Let’s hit the top reasons why gamers make great employees.

Video games are becoming increasingly popular, and it is no secret that gamers have specialized skills that can be valuable in the workplace. Software developers will likely see a faster employment growth rate than other professions due to an increase in computer programmers. Now, education is important for being recognized as a developer and further developing your career.

Research shows that educational attainment rates among gamers vary depending on the platform they play on, which illustrates the importance of limiting yourself to one way of thinking.

Increasingly, companies are hiring gamers to help improve their products and services as a result of technological advances. You might be in luck if you’re looking for a career change today!

Gaming is becoming a big part of our society because its influence on people reaches far beyond entertainment. Gamers have evident qualities that employers seek when choosing new members of staff.

The average gamer is a fast learner. Since they’re used to learning things on the fly, it’s easier for them to apply this skill to other contexts. They can learn how new software works easily and quickly.

Developers, such as programmers and animators, need to be able to pick up new systems to improve their work or fix errors. Gamers have already proven that they know how to do this.

A study by MTV revealed that the majority of gamers’ ages range between 18 and 29 years old, so naturally, they move around a lot more than older generations due to school or work commitments; Proving their flexibility because of the experiences they’ve had in their lives.

Even if you’re older than 30, employers will still consider your gaming past because it shows that you have experience learning different concepts and don’t limit yourself to one platform or game. In terms of the tools they employ, artists, animators, and programmers should be flexible, taking feedback to improve their work. This ability is essential in team-based workspaces where everyone has an important role to play.

Gamers are accustomed to different types of strategy games, which means they can easily adapt to other roles on a team. Learning quickly and communicating what needs to be done is more effective than working by themselves.

Gamers have been shown to have a high level of fluid intelligence, which is the ability to solve problems that require an initial subjective assessment or ‘trying out’ rather than following a set of instructions. They’re able to think outside the box since they’ve done it many times before in their games.

Fluid intelligence is great for problem-solving and can lead you to some incredible conclusions or inventions, as showcased by gamers such as Steve Jobs. Inventions aren’t always about making something new – oftentimes, they involve improving existing products too.

Having good problem-solving skills are important, especially when you have to be able to work under pressure. Gamers are used to doing this because they know that some games require quick reflexes and thinking. If their character dies, gamers might feel the urge to try again right away.

This makes them great candidates for collaborative workplaces where everyone must contribute without being too demanding about their roles or skillset since it provides more flexibility within the team. Problem-solving is part of many jobs, so a gamer’s experience will undoubtedly benefit a workplace.

Another study from the University of York had similar results, so being creative seems to be a common trend among gamers [8]. This means that gamers can be creative when they apply their problem-solving skills in different situations.

Computers are everywhere, so you’ll need some innovative workers to come up with fresh ideas for improved hardware or new applications. For instance, check out How to build gaming PC: The ultimate guide to see what they work with. By increasing the availability of websites and videos about computer science, more gamers are learning how computers work, which makes it easier for them to determine which hardware or software they need to accomplish specific tasks.

Gamers develop unique ways of playing games based on what they’re comfortable with and enjoy most. They could be good at using different tools and innovations to make their gaming experience more enjoyable. A creative team member can bring new ideas to the table.

Any workplace can benefit from creativity, particularly when looking for ways to improve products and services. A creative worker might come up with small changes to an existing idea and surprise everyone.

Gamer’s average age is over 18, which means they’re mature enough to handle various responsibilities. It is likely they have worked or are currently studying, so they know how to manage their time well.

Gamers are less likely to disrupt the workplace, since they have work experience already, allowing them to answer interview questions with more confidence. Adaptable to changes in their field, they also have good interpersonal skills.

Many studies suggest that video game players have heightened empathy than non-players. They care about their environment and relationships with other people, so working at a store or living in a community will not be unproblematic. If anything, this makes them better candidates because they know how to handle their emotions and work well with people.

Gamers often play games that require them to make mistakes and keep trying anyway. As a result of playing certain games as a child, they become mentally resilient as they grow up. This trait is beneficial for those who have a more risky career because it helps them bounce back from losses.

Resilient workers are likely better suited to risky jobs where mistakes are always possible, such as being a surgeon or an engineer. Making mistakes is inevitable, so learn from them!

Employers should advance to the Next Level

Since most gamers have jobs already, they’ll be more reliable for employers who seek people who are serious about what they do. Gamers are known for being passionate about what they enjoy doing most, so it’s no wonder that many companies would love to hire one as an employee!

Top 4 Benefits of Automating Your Business
Next Article

Unpacking 4 Well-Known Digital Investments
AdBlock Detected
Our site is supported by ads, affiliate links, and sponsored content. This helps us make money to continue what we do. Please whitelist to support our site.
Okay, I'll Whitelist
Welcome Back!