Investing in the MAGIC of an Arcade…

Getting Bored of Your Favourite Game? Here’s… 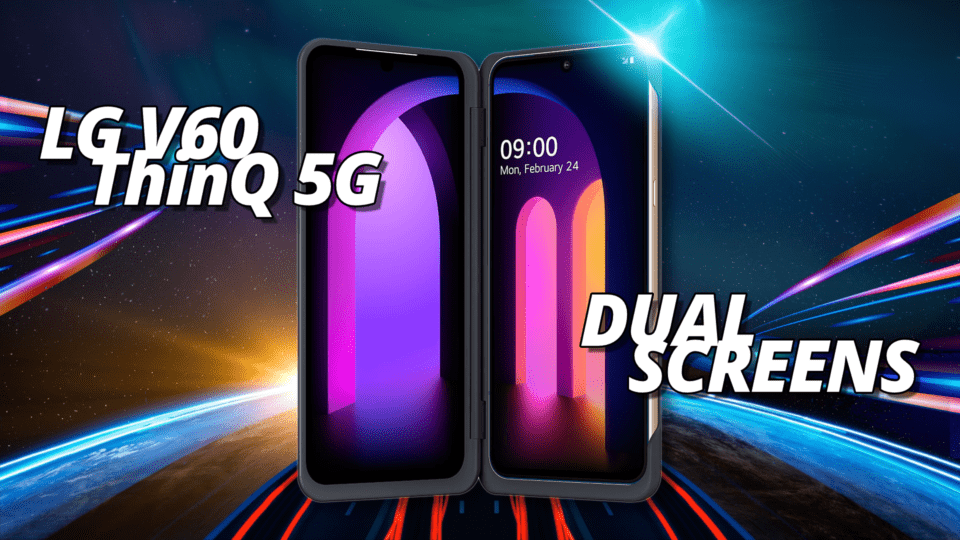 In case you’re interested in my conclusion and final thoughts, you can always check the table of content, and click on my verdict or keep reading on to get a full view of what the LG V60 is!

LG V60 ThinQ 5G is one of the first 5G devices in Canada. LG’s smartphone devices have always bit a hit or miss among consumers. The LG V60 ThinQ 5G Dual-Screen is aiming to change that. I believe this to be the underrated smartphone of 2020.

This year, LG’s release of the V60 has raised eyebrows. Bringing some unique features and a bold new style to it’s V series. The dual-screen accessory that comes with the LG V60 ThinQ 5G is going to appeal to gamers, multitaskers, niche and downright folding screen enthusiasts.

The V60 doesn’t have the latest specs that you’d expect out of a device, but don’t let that stop you. The device is very capable of delivering on all fronts. You’ll take note that the LG V60 ThinQ 5G Dual-Screen is set up to be part of the playing arena with its Snapdragon 865, 8GB of RAM, 5000mAh battery and it’s astounding Quad DAC via a 3.5mm jack!

Overall the LG V60 packs a lot of perks that set it apart from the competition but still very relevant, but if you’re interested to learn more about the LG V60 ThinQ 5G Dual-Screen, you’ll need to keep reading. 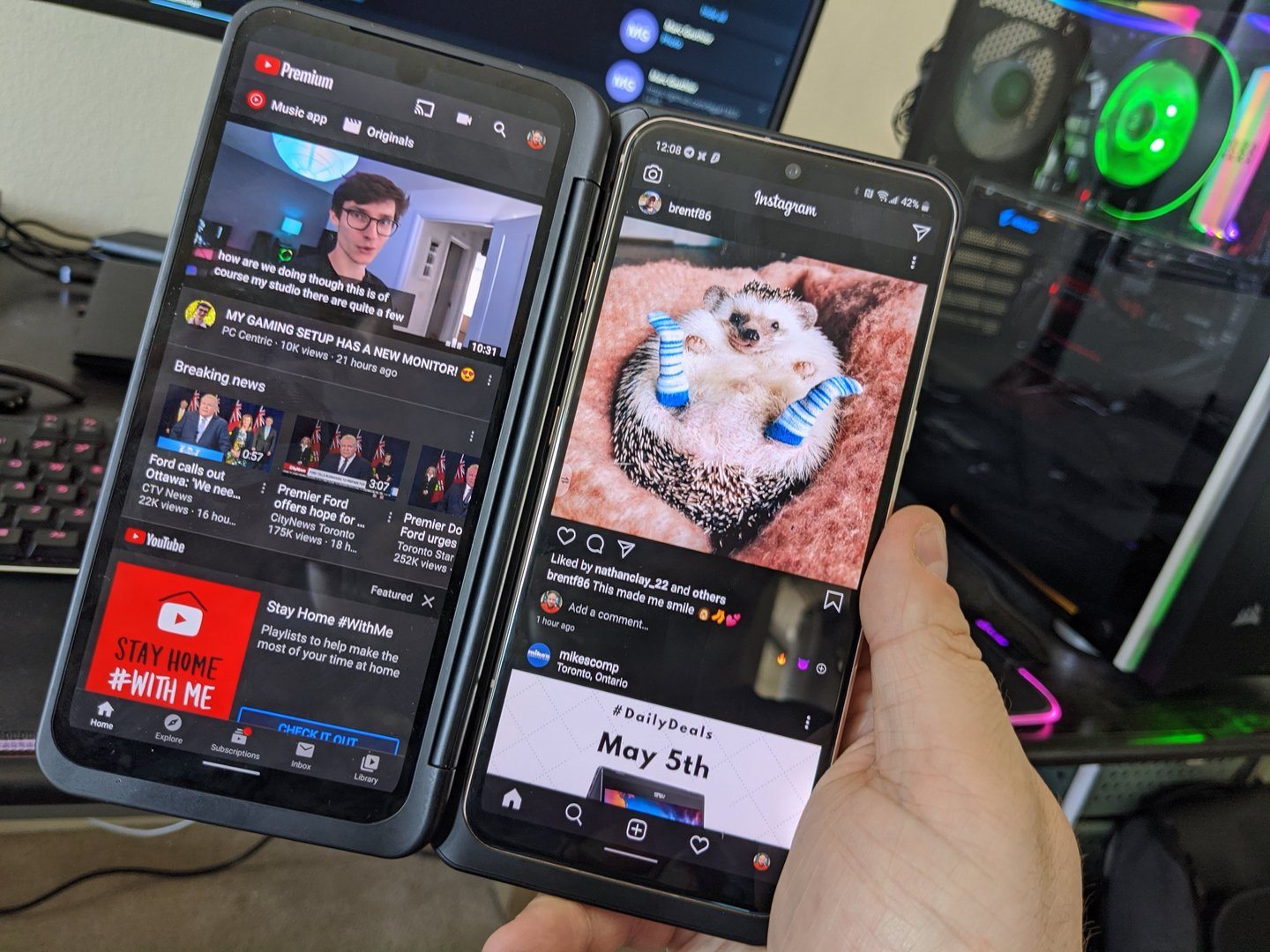 The LG V60 ThinQ 5G Dual-Screen retails for $1100 Canadian at Bell and Koodo while making this the cheapest 5G smartphone with a dual-screen on the Canadian market. The only version that’s available at either location seems to be the “Cassy Blue” and the 128GB variant.

Having one option isn’t bad, but being able to offer a variety of colours sets you apart from the competition. Reaching into fun and inspirational colours might be something to consider on LG’s part.

The LG V60 is a step in the right direction from its predecessor. We can see that the blue-ish glass back with rounded corners is more reminiscent of current trends. An aluminum frame of a gold tint with a brushed finish gives it flair. The camera placement on the back, the elevated bump, with the gold-trim is giving the V60 a familiar look.

The buttons are all located on the left side of the device except for the power, making this a very awkward way to access the volume, and the Google Assistant button.

Looking at the bottom of the LG V60, we can see a 3.5mm jack, the USB-C charging port, and a speaker. At the top, we have the SIM tray and access to the Micro SD card slot.

The main point that makes the LG V60 ThinQ 5G stand out is the Dual-Screen case accessory. The Dual-Screen works like a folio case, opening up to reveal a secondary display. If you do make use of the dual-screen folio, you’ll need to know that it takes its power directly from the V60. That 5000mAh battery may not last that long if you continuously make use of it.

While you are using the Dual-Screen feature of the LG V60, you will need to make note that a magnetic dongle is required to charge the phone while in the folio.

The use case of this setup will depend on the consumer. I’m using it to multitask with one side displaying my emails and the other keeping the hustle alive. The other way to make use of this is by setting yourself up for streaming while playing a video game!

Additional bonus, the front of the folio, provides a monochrome display that’s as big as a finger to let you know the time, notifications received and or calls. 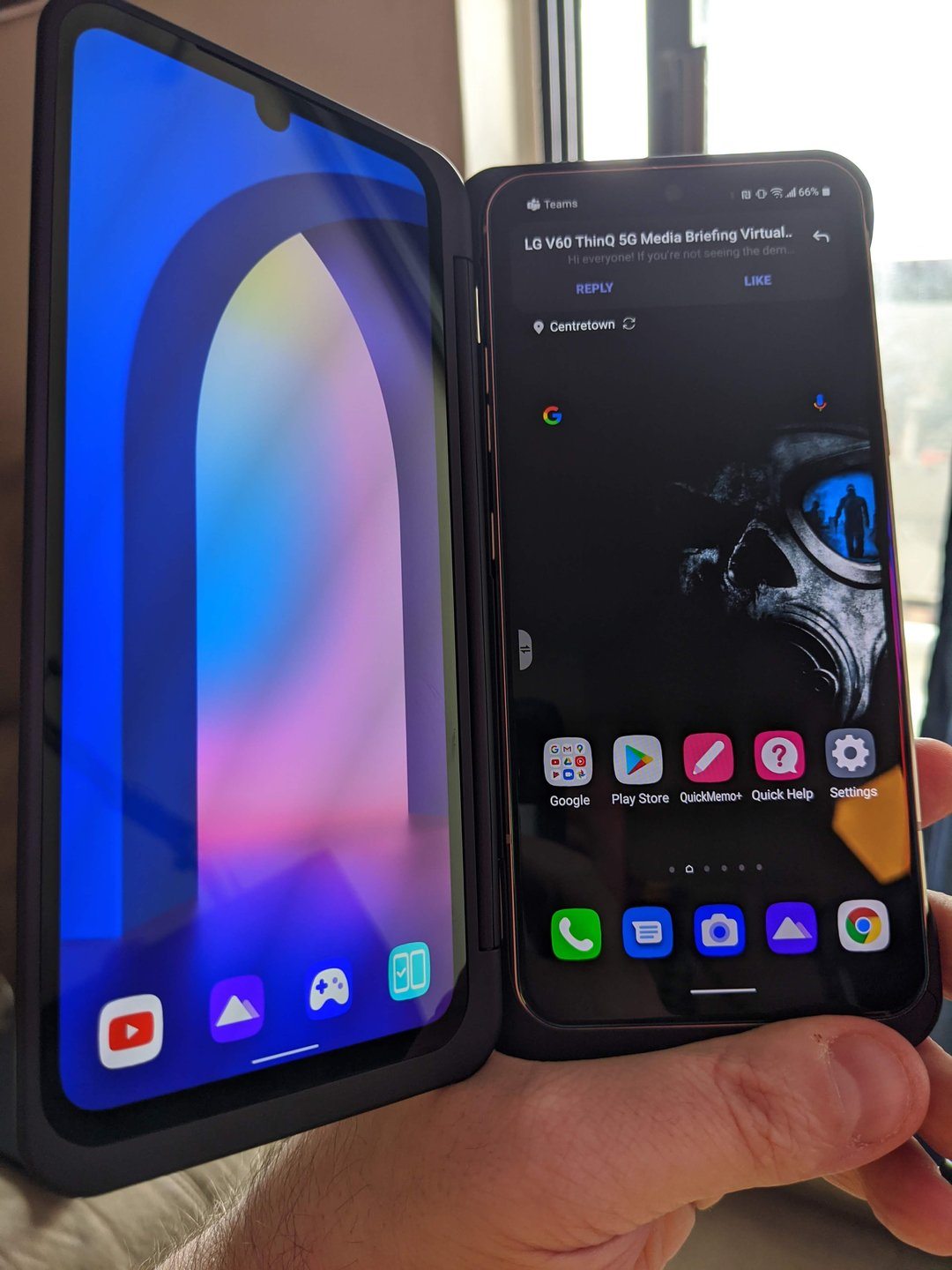 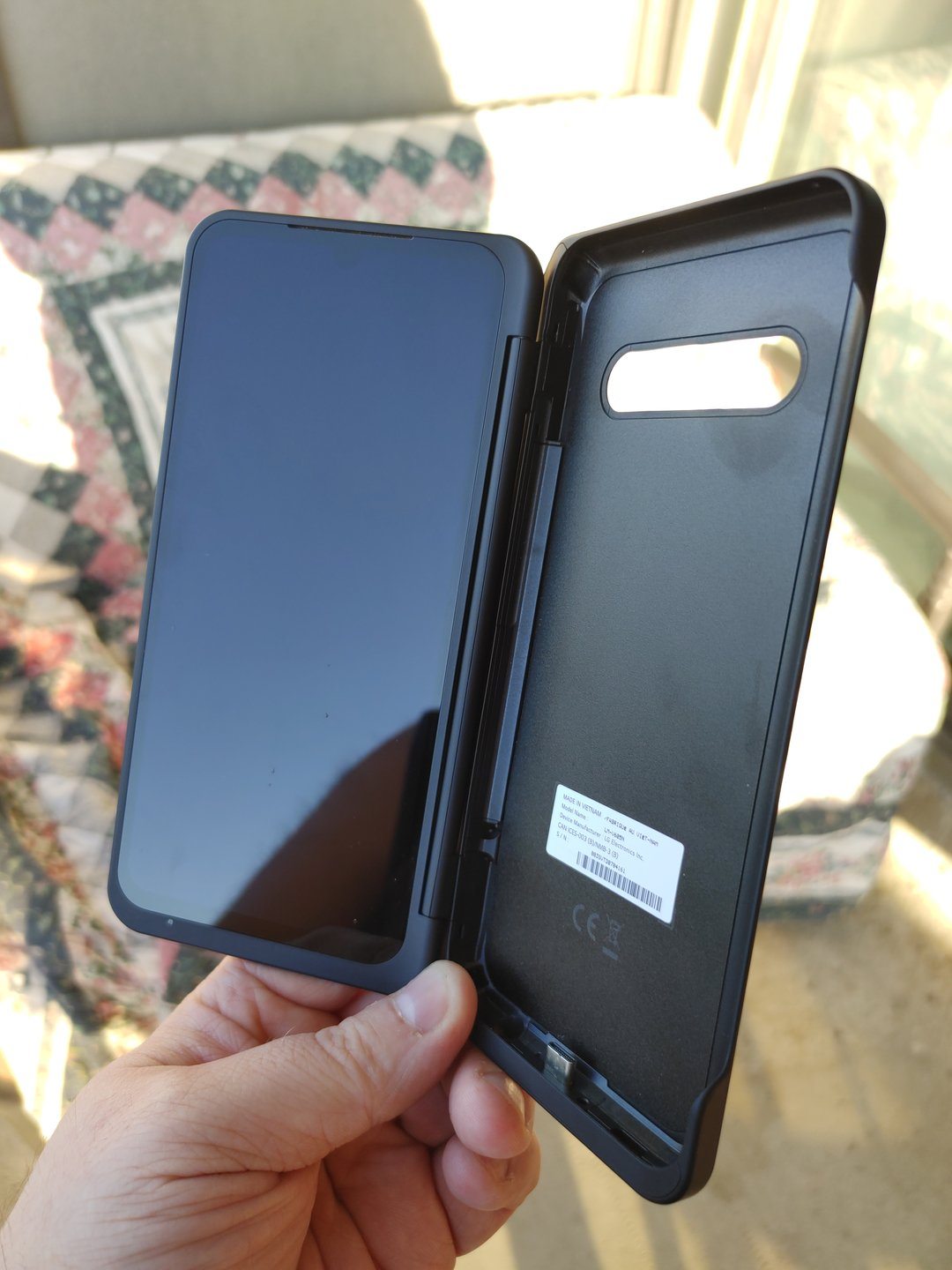 Experience sound like never before with the 32-Bit Hi-Fi Quad DAC. Get lost in movies, music, games and more with a full, clear, authentic sound experience. ASMR Recording isolates and focuses on the sounds you want and fades everything else out for an effect that will make your senses tingle. LG 3D Surround Sound optimizes the audio playback by changing settings based on the content.

Equipped with four mics, audio can be captured from every direction. Voice Bokeh can zero in on voices to recognize and separate them from background sound to focus on what matters.

The LG V60 packs a 6.8-inch OLED display (which uses less power than other display panels) with a narrow 20.5:9 ratio. Support for HDR10+ is present for a bit more clarity in movies, other types of media, which keeps this in-line with other flagships.

The in-display fingerprint sensor is slower on the V60 compared to other devices in its class. The accuracy is pretty spot on, and I had no trouble unlocking the device.

The LG V60 comes with 3 lenses on the back; A primary 64-megapixel wide-angle, a 13-megapixel ultrawide, and LG’s time-of-flight z camera. On the front of the V60, there’s a 10-megapixel selfie camera. The LG V60 offers a peculiarity, the ability to record 8K video with the back lense.

The entire experience is driven by scene optimization, AI, and technological wizardry. Take the time to check the sample pictures I’ve taken over the last two weeks. 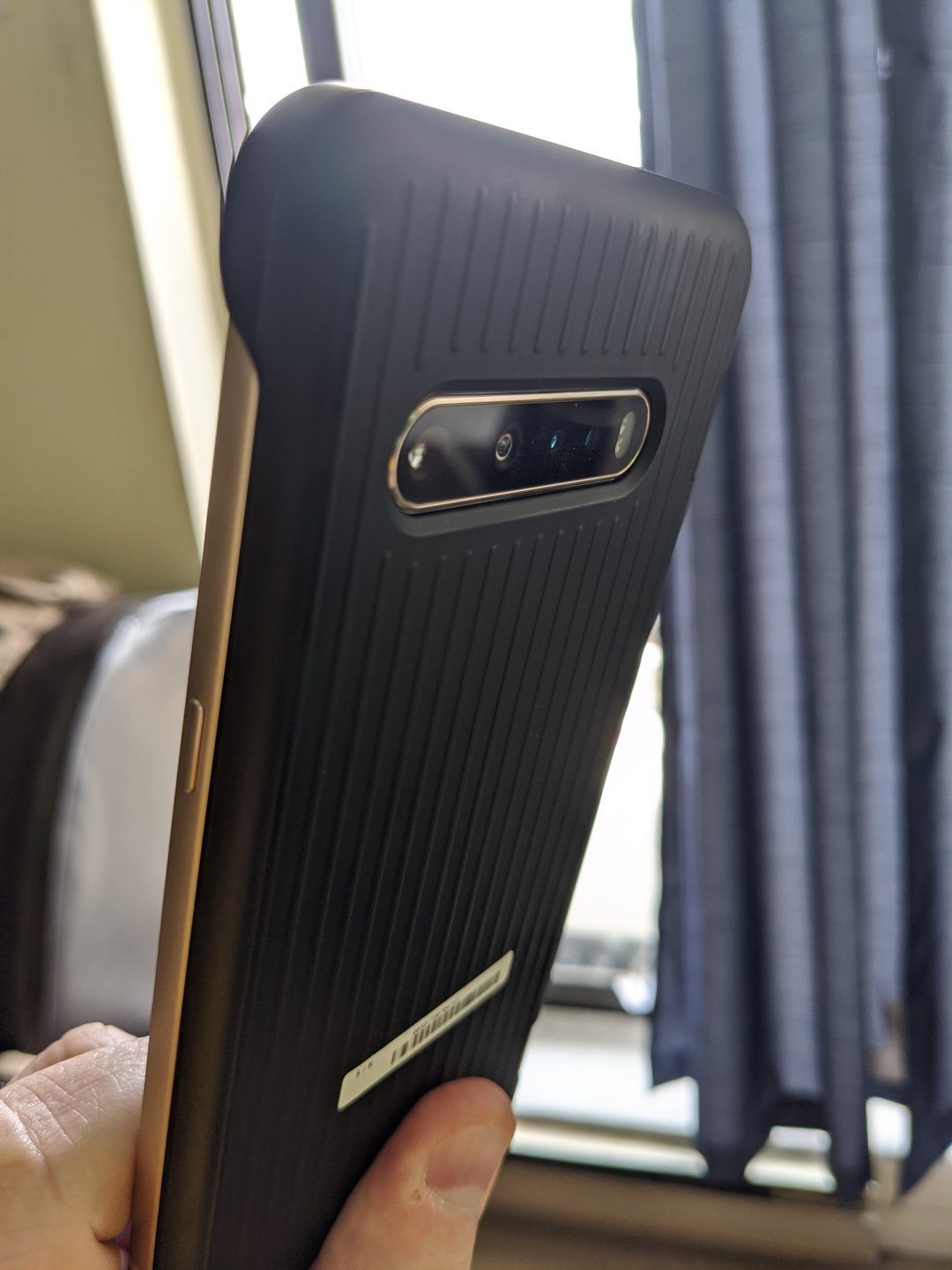 Driving the beast that the LG V60 is, a Snapdragon 865 and 8GB of RAM. The core is in-line with high-end specifications. The question is, can it drive?

The showing in Geekbench 5 was particularly promising, as the device turned out an average multi-core score of 3,387 across three sessions. Benchmarks might not mean much to the average consumer.

Often the question that most consumers will have is; Is it fast? Does it take good pictures? Does it have lots of memory? Yes to all of that.

Go ahead and enjoy the latest games and stream at the same time and see how far this gets you. Set yourself up on Discord, load PUBG and get the game energy flowing!

The LG V60 ThinQ 5G Dual-Screen has a massive 5000mAh battery. This larger capacity allows for the use of the dual-screen function without much fuss on battery life.

When it comes time to top-up, the V60 comes with a FastCharge 4.0 charger in the box, which LG claims gets you 18 hours of use (or 50% capacity) from 30 minutes of charge. It also supports wireless charging if you’re into that kind of stuff.

If you're looking for a smartphone that delivers a dual-display system at a reasonable price, the LG V60 ThinQ 5G Dual-Screen is available for $1100. Much cheaper than devices like the Fold or the Razer. With so few devices providing you with large battery capacity, a 3.5mm audio jack or even a DAC embedded, this might just be the device for you. I can see content creators, entertainment buffs, gamers, and people geared towards productivity, making a lot of use of the V60. The dicy bits and the reality of the LG V60 ThinQ 5G Dual-Screen, it's bulky, and one-handed use is near impossible. The camera setup is not at the same level as the competition. It does good photos, but not to the extent seen from the Pixel's, the Huawei's or the iPhone. The LG V60 ThinQ 5G Dual-Screen is a content creator, gamer or entertainment buffs all-in-one device. Come check out the detailed review. 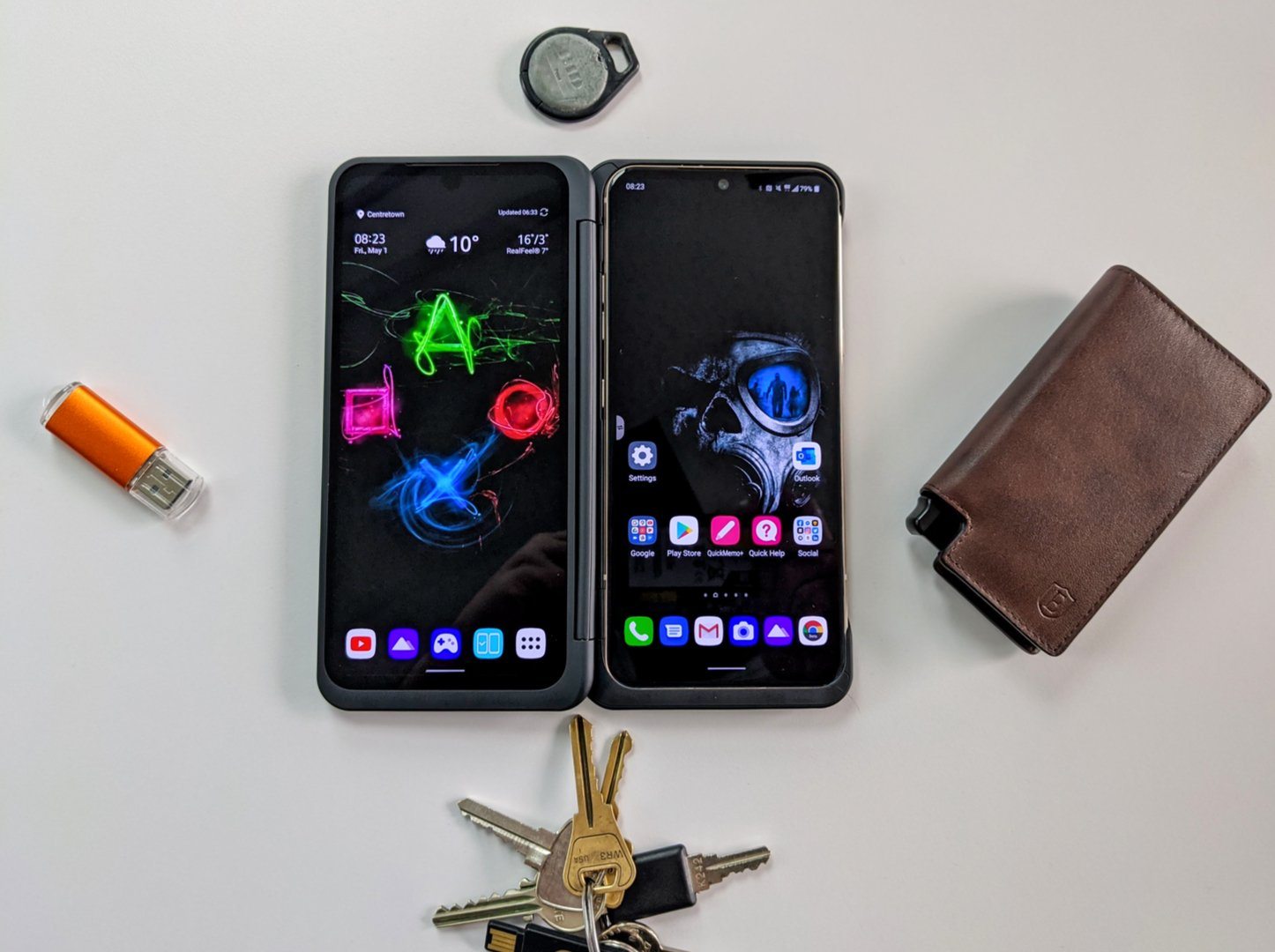 Investing in the MAGIC of an Arcade Cabinet? 5 Things to Consider!

Earning Money From Home – Free Apps You Need to Start

Getting Bored of Your Favourite Game? Here’s What To Do

Martin GuayNovember 23, 2020November 28, 2020
Android News & All the Bytes accepts donation of any value. It's always good to know that you enjoy the content being produced.
Donations accepted $1, $3, $5 or any amount you'd like to send over! Everything is appreciated. Currency is in USD.

1 of the few Gaming Chair that doesn’t break the bank?