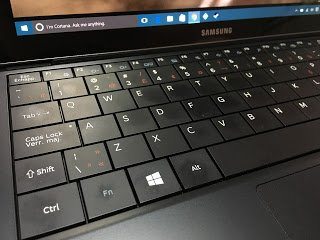 (article was re-published with permission via Ryan’s blog)

So, it’s no secret to any of you that now and again I review some tech things on my site I started up +Android Coliseum.  It’s fun!  Now and again I’ll get requests to view some item that doesn’t quite fit in the Android realm.  Most of the time I just say no, thanks but no thanks.  I like to keep topics clean there. But when +Samsung Canada allowed me a shot to take a look at the latest tablet, the Tab Pro S, it took me a time realize it wasn’t an Android tablet.  All the same I was very interested. See, I used to love netbooks.  I don’t know why… I just did.  They weren’t really laptops, just smaller versions.  As much as laptops are meant to be ‘portable’ and mobile, a lot of them just really weren’t.  A netbook was much easier to take with you. And this Tab was pretty much that, but without sacrificing on the screen size or the guts to allow you to do what you need to do. It reinvigorated me again for the love of a device that I could take with me and be able to do ALL I needed without really much sacrifice.  It unshackled me from my desktop to do all the ‘real work’ I would have to do for the site and whatever else, because I had this with me most places. So, first the specs: 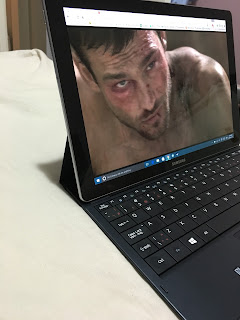 The first thing to get used to on it was the keyboard.  It comes with keyboard that wraps around like a case (a la, the windows surface devices).  I’d not used one before, so figuring out the folds so it lays/sits properly took me a bit.  After a moment you’d feel like an idiot not knowing.  The angle works just right for sitting up, the laying back option isn’t as conducive … or so I’ve not found a situation. The case has some strong magnets.  I mean strong… it’s hard to get off of the back, and the way it clicks into the keyboard… it’s sturdy, nothing loose or falling off any time soon. The keyboard itself feels a little ‘thin’ and as I’m typing now on the arm rest of my couch it starts to feel like it’s bending over the arch.  That being said, for the past 2 weeks and a bit I’ve been writing everything on this in pretty much the same position and there hasn’t been any issue, no signs of any bending. It’s unfortunate the keyboard layout is of the new style… where the \ key is taking up space where I normally find my enter key, and the left shift isn’t as wide as there’s a \ key there (why does there need to be two slashes?)… so it’s taking me some time to get used to it. The trackpad is good, very responsive and it’s funny how quickly you notice how often you use a right click, or middle click button as there’s none on the trackpad.  You can tap with 2 fingers for right click, but 3 fingers brings up Cortana. Connecting the tablet to the keyboard has it in ‘pc mode’ and then disconnecting it, you can have it in ‘tablet mode’… the only difference I see is that the start menu goes away to have just a few icons for switching. 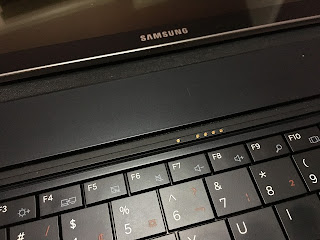 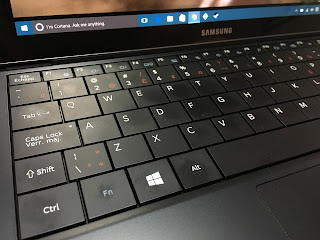 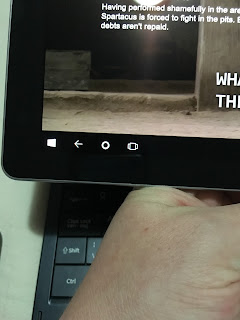 Okay, going around the rest of the tablet, there’s a power button and a volume rocker on the ‘top’ of the device, and then there’s a button on the left top that’s used for the start button (seems a bit odd). 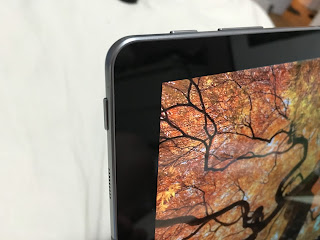 Aside from that there’s a headphone jack on the right bottom side along with the USB-C connector. 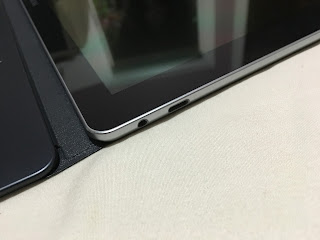 That’s about the only downside to it – as much as USB-C is the way of the future, there’s not a lot of accessories for it.  If I wanted to plug in a mouse (sure I could get a bluetooth one) or a data key… there’s nothing that I have that would work without having to Google for some adapters). On the usage end… it performs admirably.  I used it to write the articles on the site, watch Netflix and Kodi and then there’s a few Steam games here and there (I couldn’t use my controller though, as it’s USB). But how about battery?  Well, I’ve been writing articles for the past couple hours and it’s at 63%, saying there’s 5h18m left to go.  Not too bad. Best about it is that because it’s using the quick charge, it doesn’t take all that long to re-invigorate that battery, a little top up here and there and we’re good.  The charger is just a small wall wort and then the cable is … well not quite 6ft long, but it’s long enough so you don’t have to worry. 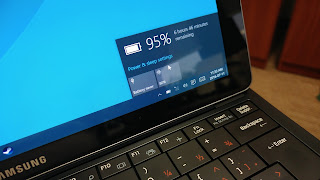 The display is perfect, nice vividity (yes, I made that word up) and holds up well in sunlit areas (just a word of note that if you’re using polarized sunglasses that I have, the polarization usually affects items in landscape mode, and when it’s attached to the keyboard it is in landscape mode, but wasn’t totally polarized out. Now, how does Samsung want you to integrate this with all the other devices you have?  They have Samsung Flow.  Look into it and you’ll see why there’s an NFC logo on the keyboard next to the trackpad.  I was hoping we could have used that as a security thing … tap your phone, or my ring and then it’d bypass the password. 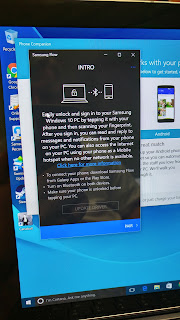 But no… Samsung Flow lets you tap your phone and install the Flow app, which then lets the computer have a companion app to share your notifications.  Unfortunately, I’ve been using the Moto G4 Plus which is lacking in the NFC department, so I didn’t get the chance to give that a go. Overall, for the $1300 … it’s a lot to pay, but you get a lot.  Especially the ‘smug’ feeling of just packing up your tablet and carrying it easily just about anywhere you want.  That is a very satisfying feeling to have all that power in just a few inches packed away and you could take it up and go, just like that. Like I said, it has me very excited about mobile computing, and not just phones that do it all, because, as much as I hate to admit it, sometimes you do just need a PC to sit down with, with a good size screen and keyboard to get some real work done. This lets me have it all.  When I want to use my phone for most of my day to day interactions, it’s fine. But when I want to get into it, a small binder is nearby for me to pull out and get busy.