(this article was republished, with permission, from Android Coliseum)

So, it’s not often that I get to play with something outside of a typical phone accessory (keyboard, headphones, etc…), so when asked to look at the Air Purifier I was really taken aback.  I wanted to remind them what it is that I review usually … I mean I have been interested in an air purifier for a while, I do have allergies and well ever since the mini-flood our city had back about 5 years ago I do get a little concerned about humidity and if there’s any lingering issues. 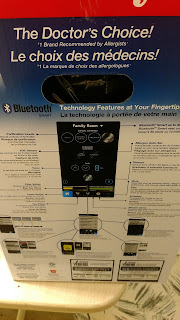 Then I realized that the 250B model is the model that can be controlled with an app, I was more than happy to give it a whirl.  I mean, it is the Doctor’s Choice of course! 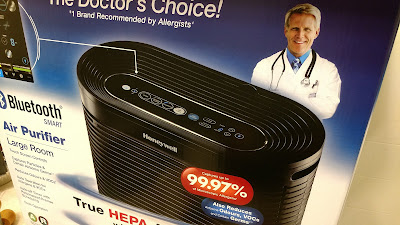 So, I don’t know much about HEPA filters and how they work, so I won’t bore you with those details, just know that this air purifier has 2 HEPA filters PLUS it has an odour filter as well.  Sort of a 2 stage protection/cleaning.

For this model, it was recommended for rooms about 310sq.ft. good enough for most rooms.  In my testing I had it in the living room, the kitchen, my bed room and the basement/den area.  Each bigger than the suggested size, and each time I noticed a difference.

In terms of cleaning a room it has several modes: germ, general clean and allergen.  There’s also a turbo mode with like kicks it up to 11. 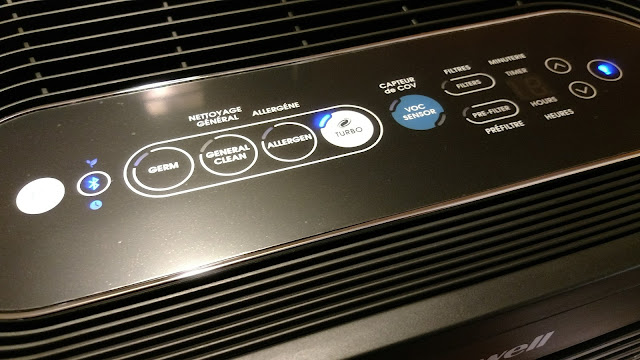 There’s also a VOC (volatile organic compounds) mode, where it senses what’s in the air to adjust appropriately.  I’m not sure what VOCs you’d have in your household, but … hey, the mode is there.

What’s been neat is that the modes are all fairly whisper quiet.

I can sit here in my little office space in the den and not hear it going and it’s only about 7 ft away.  The aquarium is more than double that and I can hear that thing cycling water way louder.  Well, maybe I can hear the purifier going, but it’s a sort of white noise that’s easy to ‘not hear’, if that makes any sense.

On the machine there’s also a timer switch that you can have it just run for a few hours and shut off.  All very neat.

Where the real cool bits come in is that this machine also has bluetooth, meaning it’ll connect to your phone. 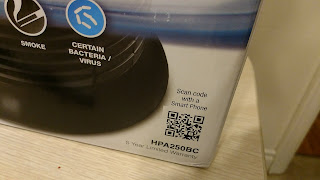 They put the QR code right on the box!

The app (albeit looking a little like it came from the Gingerbread era) can do any of what you can do on the device.  It’ll let you set it to any mode, turn it on or off… very handy. 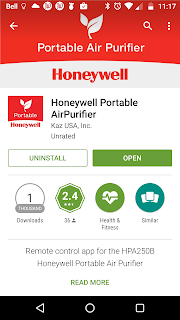 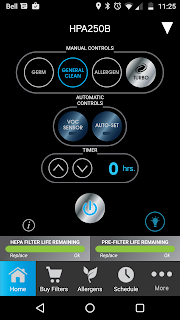 But it doesn’t stop there.  You can set it to turn on by proximity (i.e. if the machine sees that the phone is now near, it’ll turn on).  That’s very handy. 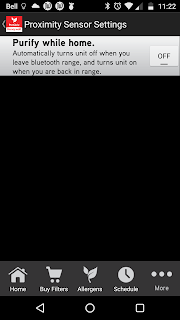 Also, on the main screen you can see the status of the filters (on the machine it’ll be a light that comes on to say change them) – I don’t know if the green bar will slowly become less filled, or will change colour or just say “change me”, I haven’t had it that long.  Apparently they last months and months.

Where it gets even better is that with the app you can set up a schedule … so my wife gets home about 315pm, so I can have a schedule that says M-F at 2:55pm turn on turbo mode for 30 minutes, and then turn to normal.  That’s nice so you wouldn’t have to have it running all day (you know with peak hours coming into effect and all). 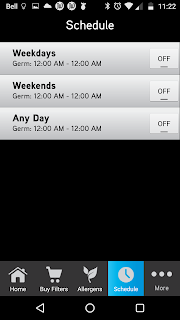 Where one of the neat things would be is that it gathers allergen information from weather networks, and adjusts the settings accordingly… but for some reason, you need to have the ZIP code, meaning it’s US only. 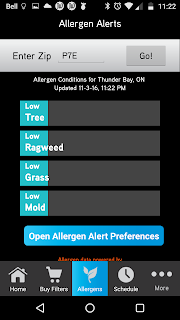 We had my folks over and I plugged it in in the living room and my mom said immediately she noticed a difference.

I let it work on Turbo for a little while and then left it for a day in the basement and the basement smells fresh again.  I’m sure it’s more placebo than anything, but it makes me feel good about it.

It’ll be interesting to see how it handles next allergy season.

Now, most will say that $250 is a lot to spend, but most good air purifiers are about the $200 mark, so for the extra cash you’re paying to have the smartphone option, which, personally, I think is worth it.

As nice as it is on its own, being able to control it by phone or have added features to set up schedules, watch the filter levels, etc.. it’s definitely worth it.

[NEW] [Review] Nomad Base One MAX Wireless Charger is classy!